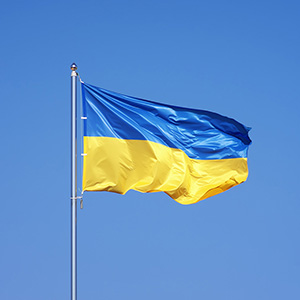 As war rages on in Ukraine, discussions have turned to how the international community can assist the country in its rebuilding efforts. On May 17 the D.C. Bar International Law Community hosted a virtual discussion on the role of international organizations and international financial institutions (IFIs) in postwar recovery should Ukraine prove successful in repelling the Russian invasion.

Presented in partnership with the D.C. chapter of the Inter-American Bar Association and the International Law Committee of the United Nations Association of the United States of America, National Capital Area Chapter, the forum was moderated by FisherBroyles, LLP partner Gene M. Burd and featured a broad array of thought leaders who addressed practical issues relating to reconstruction.

Ivan Lishchyna, a prominent Ukrainian human rights attorney serving as the country’s agent before the European Court of Human Rights, identified a number of potential issues regarding postwar compensation. For a Ukrainian suffering the destruction of property in Ukraine as a result of the war, Lishchyna identified four possible avenues to seek compensation.

“The most obvious is a BIT [bilateral investment treaty]. There is a BIT in place between Russia and Ukraine. There are also numerous treaties between Russia, Ukraine, and other countries,” he said. However, while the treaties provide an ostensible basis for suit against Russia, claims for damages outside of Russian-held territories might not fall under their scope, Lishchyna pointed out.

The European Court of Human Rights might also hear claims for compensation, Lishchyna said, though a recent decision in Georgia v. Russia (II) held that the Geneva Convention is inapplicable when fighting is ongoing because it is not determinable who holds specific territories.

Next, Lishchyna addressed the possibility of raising claims in Ukrainian courts. Recent caselaw in that jurisdiction held that Russian property, held by the Russian state, is immune from any collection. Lishchyna, however, noted that there isn’t much Russian property in Ukraine and that any judgment would be difficult to enforce abroad.

Finally, Lishchyna said that it is possible to raise claims in foreign courts, including those in the United States, but his own efforts on this front have been unsuccessful to date. “What I’m saying is that, at the moment, there isn’t a clear, easy, accessible legal infrastructure for any kind of claim of this kind,” he said.

He proposed the creation of a special body to handle future claims, citing the Iran–U.S. Claims Tribunal established in 1981 to resolve disputes between the nations following the hostage crisis, and the U.N. Compensation Commission, established in 1991 to address issues related to Iraq’s invasion of Kuwait. However, he noted that Russia would be unlikely to accede to something similar, given its status as a permanent member of the U.N. Security Council.

Speaking from Kyiv, Roman Sulzhyk, independent supervisory board member of PrivatBank Ukraine, supported the creation of a tribunal or commission to resolve property disputes following the conflict’s end, but cautioned that there would be many parties vying for Russian assets in the war’s aftermath.

Sulzhyk urged that in devising a system to compensate for injuries incurred during the conflict, Ukrainian claimants should receive priority ahead of others. In the interim, Sulzhyk said that international regulators could support Ukraine by instituting mandatory disclosure of Russian investment by all publicly listed firms, providing information to investors and consumers regarding the degree of Russian investment by business. According to Sulzhyk, research has shown that companies whose investment in Russia has been revealed suffered a drop in share prices, resulting in moves to divest from Russia. Sulzhyk said IFIs could extend visibility even to privately held corporations.

Vladyslav Rashkovan, alternative executive director of the International Monetary Fund, described the different roles IFIs could play during and after the war. Rashkovan said IFIs have already provided financial support, including the release of over a billion dollars in IMF funds authorized in just seven days, a process that normally takes 12 to 14 weeks. During this same period, IMF also actively urged member companies to provide their own financing for the war effort, Rashkovan said.

Following a World Bank assessment in the war’s aftermath, reconstruction would likely require additional assistance and funds from the European Union, which Rashkovan hoped would accept Ukraine’s request for admission, and from the liquidation of Russian assets.

“If everything goes well, and with the support of international institutions and G7 and EU countries, I hope that we will have private business return to the country,” he said.

Adam Tiffen, board member of the Alliance for the Restoration of Cultural Heritage, spoke about the threat to, destruction of, and compensation for Ukrainian cultural treasures resulting from the Russian invasion. Tiffen said that while people understand the rebuilding of critical infrastructure following a war — roads, power, and industry, for example — there is also a need to cultivate an expanded understanding of what rebuilding means.

“Russia has deliberately targeted Ukraine’s way of life, values, traditions, history, and cultural heritage,” Tiffen said. Even prior to the cessation of hostilities, IFIs could prevent the destruction of Ukrainian culture and cultural artifacts by funding their preservation and protection, he added.

Furthermore, IFIs can partner with organizations already working with Ukrainian authorities to document, protect, and relocate cultural artifacts. He also urged the specific designation of funds for the reconstruction of cultural heritage sites, saying that “in a situation in which everything is a priority, nothing is a priority.” Institutions were also urged to fund the identification and location of Ukrainian cultural objects sold on the black market.

Michael Strauss, general counsel of the European Bank for Reconstruction and Development (EBRD), said that in 2022 the bank exercised an unused and previously unthinkable provision permitting it to suspend member access to bank resources against Russia and Belarus in response to the invasion of Ukraine. “It was a dramatic event at the bank, probably the most important event in its history,” he said, “but I’m proud to say that it did happen.”

Regarding Ukraine, Strauss said that in its capacity as a multilateral development bank, the EBRD intends to be a major player in reconstruction. The board has already approved a €2 billion “resilience” package to support Ukrainians and migrant groups impacted by the war, he said.

At recent IMF and World Bank meetings he attended, Strauss there was some success in securing obligations from sovereigns interested in assisting Ukrainian relief and reconstruction efforts. “Those pledges will be backstopping the bank’s very forward-leaning, I would say, approach to using its own balance sheet because, as we all know, the markets are agnostic as to who’s to blame and who’s not to blame,” he said.