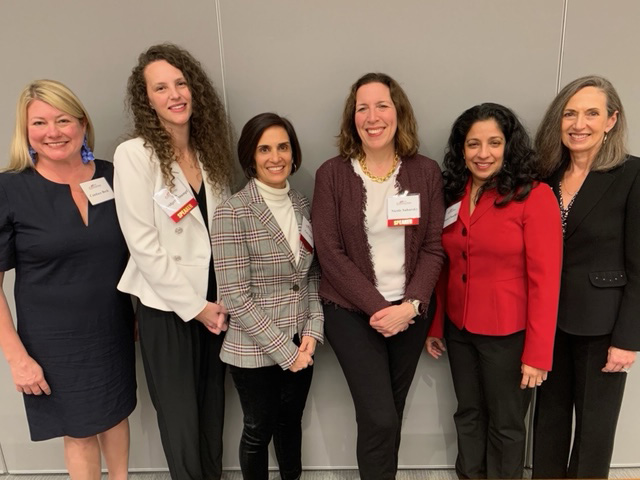 “We are still seeing bread and butter compliance issues” at schools and universities, said Neena Chaudhry, vice president, general counsel, and senior advisor for education at the National Women’s Law Center. “We need to take whatever steps we can to make our schools better.”

Chaudhry was among featured speakers at the program “50 Years of Title IX: Celebrating Progress and Charting the Path Forward,” sponsored by the D.C. Bar Arts, Entertainment, Media and Sports Law Community and the Women’s Bar Association of the District of Columbia (WBADC). Title IX of the Education Amendments of 1972 prohibits sex discrimination — relating to pregnancy, gender identity, and sexual orientation — in education programs and activities that receive federal funding.

Event moderator Bridgette Stumpf, executive director of the Network for Victim Recovery of DC, described the 37-word Title IX section as “tiny but mighty.” While crucial for girls’ and women’s athletic programs, Title IX also prohibits other types of discrimination in education, including access to instructional opportunities and sexual violence support services.

In her opening remarks, D.C. Bar President Ellen M. Jakovic emphasized the importance of preserving and advancing Title IX for future generations. “We want to continue to make sure that Title IX is there for all girls and women [who] come after us,” said Jakovic.

WBADC President Candace Beck said she helped plan the event because she wanted “people to understand Title IX’s importance and what we need to do to keep moving forward instead of backtracking.”

The panel included three D.C.-area attorneys whose work directly involves Title IX cases. Cary Joshi, a partner at Bailey & Glasser LLP, represents athletes from colleges across the country whose teams have been eliminated or who are not being treated equally. Joshi said that many colleges and universities are not in compliance with Title IX. “Progress might be recognizing the lack of progress,” Joshi said. “People might have a renewed energy around this issue.”

Chaudhry is involved in litigation, administrative and legislative advocacy, and public education to ensure that schools are complying with Title IX. Chaudhry called on attorneys to take on pro bono cases involving Title IX, noting that she’s seen parents and students demand change from their schools.

Nicole A. Saharsky, a partner at Mayer Brown LLP, noted a hopeful change in recent years. Saharsky served as lead appellate counsel for the U.S. women’s national soccer team in its equal-pay lawsuit against the U.S. Soccer Federation. The litigation resulted in a $24 million settlement.

Women and girls are beginning to see that “if they speak out, there’s actually an ability to do something about it,” said Saharsky.

Event attendees said they were grateful for the opportunity to learn more about recent Title IX cases from experts in the field. Ashley Pileika, an attorney at the Law Office of Darren Wolf, P.C., said her office recently filed a Title IX case and that she wanted to hear from the prevailing experts.

Tiffany Watson, managing attorney for the Sexual Assault Legal Institute at the Maryland Coalition Against Sexual Assault, also had recently taken on Title IX cases as part of her workload.

“This program was right on schedule for me,” Watson said.