On February 18, Judges Loren L. AliKhan and John (J. P.) Howard III were sworn in as the newest associate judges on the District of Columbia Court of Appeals. They will each serve a 15-year term. 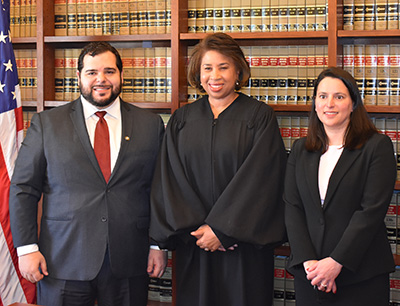 AliKhan and Howard, who were sworn in by Chief Judge Anna Blackburne-Rigsby, were among seven District judicial nominees confirmed by the Senate earlier this month shortly after the D.C. Courts sounded the alarm on the long-standing vacancy crisis in the local court system.

In remarks before AliKhan and Howard were sworn in, Judge Blackburne-Rigsby said she is confident that the two “highly qualified, talented, and really nice people will make a wonderful addition to our D.C. Court of Appeals family.”

“One of the things that I [am] so proud of is that we have strong views on just about everything. But I feel that we are a very collegial group. We disagree, but we do it respectfully. We are thoughtful and we have strongly held beliefs and views. But we are open to hearing the views of our colleagues. I think that that is a model that other democratic institutions should follow and that will make our democracy stronger. I know that you are both eager to begin your service with the D.C. Courts,” Judge Blackburne-Rigsby added.

A native of Baltimore, Judge AliKhan earned her JD at Georgetown University Law Center and began her law career as a clerk for Judge Thomas L. Ambro on the U.S. Court of Appeals for the Third Circuit and Judge Louis H. Pollak on the U.S. District Court for the Eastern District of Pennsylvania. She was a Bristow Fellow in the Office of the Solicitor General at the U.S. Department of Justice and Temple Bar Scholar in London, England, before joining the Supreme Court and appellate practice group at O’Melveny & Myers LLP.

“I was made aware that there had not previously been an Asian American on the court, so it’s very exciting. I think the court needs to represent the diversity of the city. I’m very happy to do that,” Judge AliKhan said.

Like any new position, AliKhan said she expects a learning curve. “I’m grateful that I’ve had the benefit of nine years of practice in the Office of Solicitor General where we had hundreds of cases a year before the D.C. Court of Appeals . . . Hopefully that will help me as I transition to the bench,” she added.

For his part, Judge Howard said he is looking forward to being “a part of the tradition” at the court, adding that his wife had clerked for former Chief Judge Eric Washington and that many judges at the court had mentored him over the years. Howard said it’s an honor “to come and join a court that’s unlike most other state supreme courts in the country [that] takes on so much work and does such high-quality work.”

Earlier in his career, Howard practiced law at Akin Gump Strauss Hauer & Feld in its D.C. office and later as a solo trial lawyer in Houston. Originally from South Carolina, Howard earned his JD at Georgetown University Law Center and clerked for Chief Judge David C. Simmons of the D.C. Commission on Human Rights and Judge Alexander Williams Jr. on the U.S. District Court for the District of Maryland. Howard is a past president of the D.C. Association of Administrative Law Judiciary and current chair of the Washington Bar Association’s Judicial Council Division.