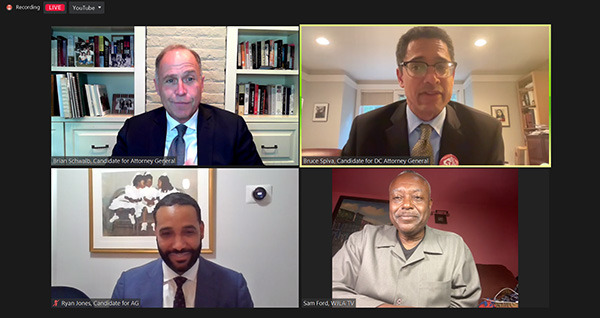 Moderator Sam Ford of WJLA-TV kicked off the debate by asking the candidates whether they agreed with the disqualification of candidate Kenyan McDuffie by the Board of Elections. The board found that McDuffie’s decade of service as city council member for Ward 5 did not count toward the minimum requirement of active legal practice for at least five of the 10 years as an attorney in the District. The D.C. Court of Appeals upheld the board’s ruling.

Bruce Spiva, who issued the challenge to McDuffie’s campaign, said that he didn’t feel the minimum qualifications set forth for the attorney general position needed clarification or modification in light of McDuffie’s disqualification. “The Board of Elections and a unanimous Court of Appeals agreed with our reading of the law, so there’s not really anything to be clarified, and the qualifications are minimum qualifications that I think the Council and the people put in place for a reason,” said Spiva, formerly a partner at Perkins Coie.

Brian Schwalb, partner at Venable, felt that the challenge to McDuffie’s candidacy was unnecessarily divisive. “I think that we should be having a conversation with the voters about what the AG’s office does. It’s got a massive portfolio of obligations … and I think we should be talking about that and the qualifications each of the candidates bring to the voters,” he said.

Ryan Jones, a solo practitioner, took a middle path, saying that he had no comment on what he characterized as an unfortunate circumstance. “I think it’s been resolved, and we need to pick up and move forward and do what’s best for District residents with the qualified candidates that we have before us today,” he said.

This marked one of the few moments in which the candidates differed substantially from one another in their positions. For the rest of the debate, all three were largely in agreement on flashpoint issues such as abortion rights in the District, public safety, and the prosecution of juveniles.

Responding to a question posed by Washington Post reporter Keith Alexander on the early release of juvenile offenders, the candidates said the District should continue to find effective strategies to keep juveniles out of prison and into programs that facilitate rehabilitation.

Jones noted that alternative approaches to juvenile justice help relieve the understaffed D.C. Courts of the responsibility for the disposition of youth offenders, while also providing opportunities for rehabilitation. “We are balancing harms when we are punishing or rehabilitating youth with the safety of the residents who are affected,” he said.

Spiva warned of the danger of setting policy based on anecdote. “The recidivism rate from the New [Beginnings] facility is actually quite low,” he said. “The goal of the juvenile justice system is restorative, rehabilitative, and so, they’re released when the facility [judges] that they are ready to successfully go back into the community, and their track record right now is very good,” Spiva added.

Schwalb said too often our juvenile justice system “forgets that we’re talking about kids,” treating them as adults when they really are children,” in particular young Black males.

The candidates also fielded questions from students from Thurgood Marshall Academy Public Charter High School on what their stance is on truancy and policing of school-aged children.

On truancy, the candidates’ responses tracked with incumbent D.C. Attorney General Karl Racine’s policy of using prosecution as a last resort. There was similar consensus on how they would address school safety concerns, though in this instance the candidates offered differing approaches.

Spiva said “ghost gun” manufacturers should be held responsible for flooding the city with guns, while Jones said he would strengthen efforts to provide students with a safe passage to and from school, avoiding security measures such as metal detectors and searches on school grounds that he felt created an unnecessarily carceral environment.

Schwalb acknowledged that youth weapons possession is a problem that the District cannot arrest and prosecute its way out of. Juveniles carry guns out of fear, Schwalb added, and so the city must provide a more safe and secure environment for youth.

Ford tested the collegiality of the candidates in his closing questions, challenging them to distinguish themselves from one another on why they, rather than their opponents, are best qualified for the position of attorney general. Each declined to levy criticism against the others in their response.

As a former Department of Justice attorney, Schwalb said he is the only candidate who has previously held a role in law enforcement. His experience in complex litigation and law firm leadership has provided him with the necessary skills for the role, Schwalb said.

Jones, as the youngest candidate, presented himself as a potential catalyst for change, saying that he would bring new solutions to old problems, as well as the zeal and tireless energy necessary to accomplish the office’s goals.

Spiva said that his experiences fighting for civil rights, voting rights, and consumer rights, coupled with his large firm management experience and track record of involvement in District issues, make him uniquely qualified for the position of attorney general. He also pointed out that he is the only candidate to have been arrested in the fight for D.C. statehood.