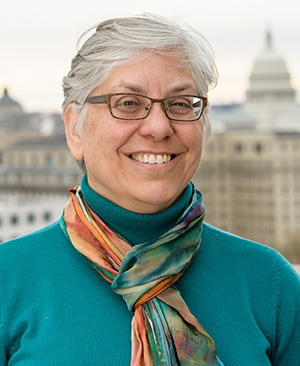 The D.C. Bar has named Judith Sandalow, executive director of the Children’s Law Center, as the recipient of its 2022 Thurgood Marshall Award. The award, which will be presented at the Bar’s annual Celebration of Leadership on June 23, honors a Bar member who has exhibited immense commitment and vision in pursuing equal justice and opportunities for all Americans.

Sandalow said she was “unusually speechless” when she learned of receiving the honor. “It’s unlike me not to have words,” she laughed. “I’m unbelievably honored.”

Sandalow has led the Children’s Law Center for 22 years, starting on Martin Luther King Jr. Day in January 2000. Over more than two decades, the organization’s staff has grown from three to more than 90 attorneys, social workers, investigators, and other professionals. Through collaboration with pro bono attorneys in the District, the Children’s Law Center helps more than 5,000 D.C. children and families living in poverty each year. Its services became even more crucial during the pandemic.

“Before the pandemic, we were grappling with some of the most extreme problems that can face somebody,” Sandalow said. “The kids and families we worked with were facing extraordinary hardship. Then the pandemic happened. And it only got worse.”

“We were literally trying to help parents figure out how to put food on the table for children who used to get [free] breakfast and lunch at schools. We had kids with critical medical needs, but it was too dangerous for their mothers to take them on the bus to the doctor’s office or the pharmacy. So, [the pandemic] changed everything in how we work,” she added.

Sandalow has dedicated her entire legal career to helping low-income children and families or youth involved in the juvenile justice system. After graduating from Yale Law School in 1990, she was a juvenile justice fellow at Georgetown University Law Center for two years. Afterward, as an adjunct professor and supervisor attorney with DC Law Students in Court (now Rising for Justice), she spearheaded a juvenile law clinic that defended juveniles charged with serious crimes.

Between 1992 and 1997, Sandalow ran her own practice, the Law Offices of Judith Sandalow, where she continued representing indigent defendants in criminal and juvenile proceedings in D.C. Superior Court, D.C. Court of Appeals, and the U.S. District Court for the District of Columbia. Before joining the Children’s Law Center, she worked in the Office of Special Officer of the D.C. District Court from 1998 to 1999, monitoring D.C. Department of Corrections compliance with several consent decrees regarding conditions at the Central Detention Facility and the Lorton Correctional Complex.

Sandalow’s leadership has been recognized numerous times. In 2007 she received the Meyer Foundation Exponent Award for her strong nonprofit leadership. In 2010 the National Law Journal named her one of “Washington’s Most Influential Women Lawyers,” and in 2013 she received the Presidents’ Award from the Washington Council of Lawyers for her commitment to public service.

In addition to serving as executive director of the Children’s Law Center, Sandalow is a founding board member of the Foster & Adoptive Parent Advocacy Center and a member of the Leadership Greater Washington Class of 2004. She also chairs the board of directors of the DC Fiscal Policy Institute.

“We have really built an institution that goes beyond any one of us,” she continued. “And through all of those years, our North Star has always been empowering the kids and families of D.C. to thrive. Law is not the outcome for us; law is the tool to upend racism and to address inequities in order to give kids and families opportunities to thrive no matter what their circumstances.”

Established in 1993, the Thurgood Marshall Award is presented biennially (alternating with the William J. Brennan Jr. Award) to a D.C. Bar member who has demonstrated exceptional achievement in the pursuit of equal justice and who has made a significant, positive impact on the quality of administration of justice.