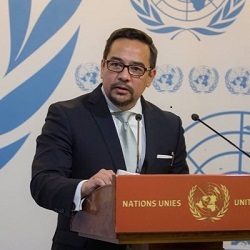 Keith M. Harper is a partner at the law firm Kilpatrick Townsend & Stockton LLP. He was, from June 2014 to January 2017, the U.S. Ambassador and Permanent Representative to the United Nations Human Rights Council in Geneva. Before that he was a lawyer known for representing Indian Tribes and individual Native Americans. He is a member of the Cherokee Nation of Oklahoma and the first member of a federally recognized Indian Tribe to serve as a U.S. ambassador.

You've recently gone back to civilian life after serving as UN Human Rights Ambassador. What was that experience like?

Serving our nation and President Obama as a representative on issues I care deeply about was the greatest of honors and humbling. And the fact is, what the U.S. does in multilateral institutions such as the U.N. can have a profound impact both on the institution and in the outcomes. Of course, our goal always is to ensure that we are having an impact on the ground regarding the issues that matter to real people.

There is a real obligation to get it right, particularly when you represent the United States. We are, as President Obama has said repeatedly, the indispensable nation to resolving international challenges. Our allies and partners care a lot about where we stand. When the United States leads, others will generally follow and this is essential, especially in areas such as human rights.

Can you give some examples of matters you worked on while in Geneva?

We also brought greater attention to the worst human rights situations, including those in Iran, Syria, North Korea, Burundi, and South Sudan. And we made significant advances on addressing indigenous peoples issues, including regularizing the study of the scourge of violence against indigenous women and girls and enhancing the power of the Expert Mechanism on Rights of Indigenous Peoples.

Before your ambassadorship, you were most well known for winning a $3.4 billion settlement in the class action lawsuit Cobell v. Salazar, in which Native American plaintiffs charged that the United States had mismanaged the trust funds of more than 500,000 Native Americans. Can you tell us a bit more about that case?

This is a case of historic injustice going back to the 19th century regarding the mismanagement of funds, natural resources, and lands held in trust status by the federal government. [Lead plaintiff] Elouise Cobell was a tenacious fighter and the real engine behind this case. She came into our office [at the Native American Rights Fund] in 1996. Cobell wanted to challenge that mismanagement in federal court.

Whenever you have a movement of such legal or political significance, you need a sort of iconic figure that people can galvanize around. She was that leader. But I also think that the other great figure in this story was Judge Royce Lamberth. Now I will concede that when we first pulled his name, with his conservative background, I was a little concerned. But he actually turned out to be somebody prepared to hold government in account in a way that I think is rare. So we had the great honor of working with these two exceptional Americans, along with a team of other lawyers.

[The case] took quite a long time. I think the exact date we filed it was June 10, 1996, and we signed the settlement agreement in 2009. Then I think the Settlement Act was signed into law by President Obama in 2010.

[Editor’s note: The settlement had three parts: a $1.4 billion payment to individual plaintiffs included in the class action; a fund of $1.9 billion to buy back fractionated land interest in voluntary sales and to restore land to reservations, strengthening their land base; and a $60 million scholarship fund to be funded from the land sales, named the Cobell Education Scholarship Fund.]

One thing Elouise really wanted was to establish a scholarship fund—something for the younger generations. So we included a $60 million scholarship fund. Unfortunately, Elouise passed away shortly after the act was passed. Such a tragic story. But what we should remember is that there is no doubt that the result here is a testament to her courage and tenacity.

Who’s been a role model to you?

[Lawrence W. Pierce of the U.S. Court of Appeals for the Second Circuit] taught me the importance of diligence, of making sure you get things right, of being open minded and having fidelity to the law.

But the people I’ve found most significant, as mentors, have been my clients. I had the honor to represent Billy Frank Jr. and the Frank’s Landing Indian Community. Billy was a warrior from the great treaty fishing rights cases in the Pacific Northwest. He was one of those exceptional people of great charisma, but also extraordinary strength. He worked closely with, among others, Hank Adams. And they were essentially among the architects of the treaty fishing battles.

Ultimately, the Supreme Court upheld their treaty fishing rights and this transformed the economies of tribes in the Washington State area. Billy and his ancestors had been fishing in these areas, such as the Nisqually River for generations, and now they were being arrested by state officials for fishing without a license.

From him I learned the importance of being resolute and steadfast and being prepared for fights even when faced with great obstacles. And the importance of your story. Someone on the ground can articulate an injustice far better [than a lawyer can], because they can tell you the story of how it impacts their life.

Is there anything in common with being a litigator and a diplomat?

Absolutely, there are many similarities. A diplomat, like a litigator’s principal job, is to persuade. The number one most important point of similarity is ensuring you have a strong narrative. If you want to succeed in diplomacy, you have to have a good narrative. Same with litigation. To be sure, to win a legal case, yes, you have to know whatever the applicable legal rules and laws are, but you need to be able to persuade [people] that the outcome you seek is the just outcome. What moves people is your story. This is as true in diplomacy as it is in litigation.

What’s next? How does it feel to be back at Kilpatrick?

It feels very much like coming home. I'm looking forward to getting back to representing clients on the issues I’m passionate about, including core challenges facing tribal communities: water rights, hunting issues, sovereignty questions, etc. What excites me about working with Indian country is that tribes can be tremendous engines of innovation and economic development, while still preserving those things that are meaningful to their communities. I also look forward to continuing to do work internationally. But no doubt, I’m excited to be back.