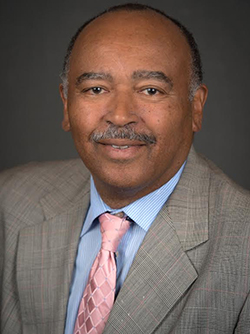 Baltimore attorney and D.C. Bar member Harry S. Johnson is comfortable being on the front lines in the legal field. First African American president of the Maryland State Bar Association. First African American partner at Whiteford, Taylor & Preston. Taking on what were sometimes unpopular sides in high-profile litigation cases. Johnson, 62, chatted with the D.C. Bar about his life, his career, and his deep connections to Baltimore. Edited remarks follow.

You first joined the Monumental City Bar Association. Can you talk about that group?

What was it like to be the first African American president of the Maryland State Bar Association?

It was a mixed deal. In one respect, it’s sad that it took until 2003 before it happened. A number of prominent lawyers who had participated could have been president before me. The cards fell right for me. I had been on the board of governors [for the association] three times. And because I was at a law firm, which had the resources to support me, I felt I was better positioned to do it. They were very supportive of me doing it. [Wilbur D.] “Woody” Preston, one of our major partners, had been president in 1976 and he was one of the people who escorted me down the aisle [at the induction].

What was your own reaction?

I really felt the weight of all the people who had come before who could have done this role, and I felt responsible to represent the people who came before me. It was also gratifying because about 30 older African American lawyers who had never been members of the Maryland Bar all joined that year. I really appreciated that vote of confidence.

I feel like it really reinvigorated my love for the profession. Because everywhere I went, no matter where, people were so appreciative of the fact that you would give your time to serve the profession. When you try cases all the time, you can be ground down by it.

Have you felt ground down by a career in litigation?

Not really. When you do the kind of litigation that I do — complex litigation — most of the lawyers are sophisticated lawyers. They understand you fight hard for your client but you learn to disagree agreeably. If you are uncivil, that makes it difficult for everyone. I think in general my reputation is that I’m a pretty nice guy. Also, judges don’t like lawyers fighting. If you have something you are willing to fight about but are willing to compromise, judges will pay attention. You have to establish a reputation that you are reasonable.

How did you manage to stay at one firm your entire career?

I was a law clerk in a prison overcrowding case, and the plaintiffs were Nevett Steele Jr., a partner at Whiteford, Taylor & Preston, and Paul Bekman, who later would become president of the Maryland State Bar Association. At the end of the project, I was asked to apply for a summer associate job in 1978 at Whiteford. I was hired and have been here ever since. I made partner in 1986. As for the partner part, I tell people, Whiteford took a chance on me in 1979 when I was hired as an associate in the first place. There were not a lot of people who looked like me who worked in a Baltimore firm.

You made it work for you.

The firm gave me an opportunity that I don’t think other people would have. If you crack a door open, I’ll kick it open. All anybody deserves is an opportunity. But I also stayed because I’m actually good at it! Any good litigator has to have a healthy ego, but you have to temper that ego. The case doesn’t belong to the lawyer; it belongs to the client. You’ve got to do what’s in the best interests of the client. Our job is to lay out the legitimate ethical options.

Can you talk about some of your high-profile cases?

The case that impacted me as a lawyer more than anything I have done was representing University of Maryland basketball coach Bob Wade [who was forced to resign in 1989 after charges of rules violations from the NCAA]. He was and is a legend in Baltimore. He was not welcomed with open arms by the entire University of Maryland community when he went there. I understand why the guys who played for him have such love for him. He really got a raw deal in this situation. I learned a lot about myself as a lawyer from representing him. Former athletes and people in the community would come up to me. I was all right because I represented Coach Wade.

What other cases stuck with you?

One was a public housing case. The most significant thing about working on that case was the opportunity to reshape public housing in Baltimore City with the use of federal resources. Four high-rise developments were essentially demolished and replaced so that they looked like other row houses. It really changed the landscape.

Another case was about an HIV misdiagnosis, which was eventually tried in Superior Court in D.C. A guy was told he was HIV positive, but it turned out, several years later, that he wasn’t. He sued because of that. It was significant because there had been a stigma about all the information about HIV. I represented the lab. But if you’re on the opposite side of a case that doesn’t mean you are unsympathetic.

Can you talk about some of your community involvement?

One of the more interesting is the Thurgood Marshall Opportunity Program through the Office of the Maryland Attorney General. Five law firms have committed to pay a certain amount to sponsor [law] students in the [summer] program. Law firms sponsor breakfasts, lunches, and seminars, and speakers can talk to them about things like applying for judicial clerkships. It’s also a great opportunity to make contacts.

Have you ever thought about going into politics?

I think it takes a particular personality type to be in politics and I don’t know that my skin is that thick. I would rather be in the position to support people who are going in the right direction. I’ll tell you an anecdote. When I was younger and I used to go to church, I wanted to be a minister because the people who were significant to me — Martin Luther King, Ralph Abernathy, Jesse Jackson, Andrew Young — were all ministers. So I talked to my minister and he said, “It’s not a job you aspire to; it’s a calling. Unless you feel that calling, you shouldn’t.” That really resounded for me. And it wasn’t until I got to be a lawyer that I learned a lot about Thurgood Marshall. For many African American families like mine, we believed the only way to get ahead was through education. My mother had gone to Morgan State, my father had some college and went into the service. They all pushed me. So when you see people who don’t have that, you appreciate their journey even more.