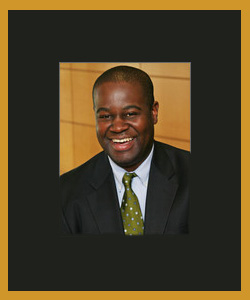 Bryan Webster was sitting at a bar in Seattle after a job interview, thinking it was for a position in Washington, D.C., where he lived at the time. His phone went off. The job was his. He deliberated for a long time, but eventually decided to pack up his things and head west.

Today, Webster is a senior attorney at Microsoft Corporation in Washington state who has an affinity for trips back to D.C. He has decades of work experience in patent prosecution and litigation, software licensing, and patent portfolio management.

Webster graduated from Syracuse University with a degree in engineering and The Catholic University of America Columbus School of Law.

How did you end up in law school?

I grew up in Texas and then went to Syracuse University, where I graduated in 1991 with an engineering degree. I had planned on going to graduate school for engineering, but then a friend of mine got a job at the U.S. Patent and Trademark Office. The notion of actually having money was an interesting one, so I followed him to the Patent Office. I got a job as a patent examiner specializing in digital communications. I figured I could put my education on hold to make some money.

What was your experience like working at the Patent Office?

It was a great first job out of college, a great place to learn how to be an employee. I learned how to bounce ideas off my colleagues and how to appreciate the different perspectives there can be in a workplace.

The Patent Office was an amazingly diverse place to work. I met people from so many different countries and cultures. I liked talking to my colleagues about their experiences in their lives. Many of them came from immigrant communities, and I liked learning about that.

How did you end up at Microsoft?

Over the years, I worked in the patent field in the D.C offices of a number of firms, including Wilmer Cutler Pickering Hale and Door and Arnold & Porter. Eventually, I worked at what was then McKenna, Long & Aldridge, doing a mix of patent prosecution and litigation. It was good work. There were ebbs and flows in terms of the amount of work, but that is normal at a law firm. As I advanced in my career, I became less focused on the brass ring of partnership and more on skills development. This prompted me to look beyond the typical law firm career path.

By chance, I got a phone call about a job at Microsoft. I thought the position was for D.C., so I came out to Redmond for a round of interviews. I spent all day in interviews, and then I headed to Seattle. I had never been to Washington state before, and didn’t know if I would ever be back. I figured this may be my one chance to see Seattle, so I headed to the two largest tourist attractions—the Space Needle and Pike Place Market. It was raining and I was getting drenched. I went into a 7-11 and asked the guy behind the counter if he sold umbrellas. Everyone in the store laughed at me. This was my first introduction to the Pacific Northwest.

I found a bar and sat between two guys. The Wizards were playing the SuperSonics, and these guys were telling me all the reasons I should move to Seattle. At that point, my cell phone beeped, and it was the recruiter telling me that Microsoft was offering me a job, but that it was in Redmond, not in D.C.

I put off the decision for as long as I could, but then I made up my mind, packed up my things, and moved to the Pacific Northwest. I started doing in-house patent preparation and prosecution. My job evolved over time, and I took on more of an outside counsel management role. Now, my practice focuses on portfolio management and client counseling.

What’s it like living in Seattle versus living in D.C.?

I have a complicated relationship with Seattle. The region is rightfully known for its natural beauty. However, the generally cloudy weather is very different from the East Coast.

Seattle is starting to rival Silicon Valley in terms of the number of startups and the presence of players in the tech space like Amazon, Microsoft, etc. Google, Facebook, and other tech companies are enlarging their footprint in the Pacific Northwest. It is an exciting time to practice law in this region.

But there is that cosmopolitan aspect of D.C. that I miss. In D.C., you can stand at a crosswalk and hear people speaking a lot of different languages.

I have family and friends in D.C., so I conjure up excuses to get back. Washington, D.C., is unique—there are things that happen there that don’t happen in other areas of the country, but you don’t pay attention to that until you are gone. Out here, there isn’t the same sense of current affairs and politics. In D.C., if you went out with friends, there was always some portion of the night spent discussing politics.

You moved about a fair amount in your career. Why?

A lot of my movement in my career was a result of me wanting to expand my skills and knowledge base. I always want to be learning something new and different. When I start to feel comfortable in my job, I ask myself, “What can I do to become less comfortable?” Someone else from Microsoft said, and I have adopted it as a talisman, [that] when looking for a job, “look for good people and a steep learning curve.”

Sometimes fate steps in and makes things happen, and that can become your impetus for change. I have learned that it helps to be agile. Change is an opportunity to try something different, to stretch your skills. Patent lawyers can be risk-averse, so they especially need to push themselves even further to take on new and different opportunities