Kathleen Mueller: How to Create Work–Life Balance? First, Love What You Do 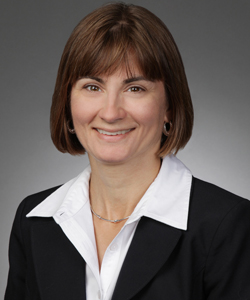 Maybe the takeaway here is to make sure you start strong.

Lawyers who are looking for a work–life balance plus a flourishing career might start by looking at what Kathleen Moriarty Mueller, counsel at Sidley Austin LLP, has done.

Mueller, 52, stepped almost entirely out of the workforce for 10 years. In that period, she tended to her two small children and went on to add two more to the family. In 2010, when all four were school age (5, 7, 9, and 11, to be precise), she decided she was ready to jump back into the workforce. She approached Sidley, asking for a part-time schedule with the firm, not on the partner track. Sidley hired her almost immediately.

Sound ideal for many working moms? There is one caveat here: By the time Mueller took her years off, she had already established herself as a star. A summa cum laude graduate of Northwestern University School of Law, she served as Coordinating Notes and Comments editor on the Northwestern University Law Review. From 1990 to 1991, she clerked for Judge Patricia M. Wald of the U.S. Court of Appeals for the District of Columbia Circuit. Next was a clerkship with U.S. Supreme Court Justice John Paul Stevens. That got her to the Justice Department, where she served as both appellate staff attorney and trial attorney for the Federal Programs Branch of the DOJ.

In other words, these are not your average humdrum legal credentials. That’s probably why when Mueller decided to reach out to Sidley about restarting her career, she was offered her schedule. It means she gets to the office by 7:30 a.m., and leaves in time to do the afternoon carpool pick-up at her children’s school. (Her husband, Don Mueller, is a budget analyst for the Navy.)

Carter Phillips, chair of Sidley’s executive committee and former managing partner, says he was immediately interested in Mueller because she was a Northwestern alumnus (like him) and clerked for Stevens, one of his “favorite justices.” When Mueller came along, Phillips says he knew “she was one of the superstars of that generation” and brought her into the firm’s Supreme Court and appellate practice group.

There, he says, she is “remarkably tenacious. She focuses on a problem and then just wrestles with it.” In fact, says Phillips, Mueller is “one of only a handful of lawyers who consistently force me to be at the top of my game.”

Peter Keisler, co-leader of Sidley’s Supreme Court and appellate practice group, says he also was immediately on board with this hire. “I thought at the time we were lucky” to get her, he says.

“When I’m working on a case she hasn’t been involved in, I almost always ask her to moot me for the case in advance, if she’s available,” he says. “She has an uncanny ability to ask the questions that judges turn out to ask, and sometimes they are questions that had not even occurred to me.”

Mark Haddad, in Sidley’s Los Angeles office, says he worked with Mueller on Kerry v. Din, the 2015 Supreme Court case that examined whether there was a constitutional right to live in the U.S. with one’s spouse, a case that is still seeing reverberations in today’s legal climate. Mueller, says Haddad, had a “critical role” throughout the briefing process and moot court preparation.

Beyond the legal eye, Phillips, Keisler, and Haddad all pointed to one other thing about Mueller: her personality.

“She’s unbelievably cheerful for a woman who has four children and works as hard as she does on as many different matters,” says Phillips.

“She’s a wonderful person—a great colleague, good-humored, supportive, kind, and fun to be around,” says Keisler.

“I remember I’ve had calls with her where she’s calling from the sidelines of a soccer field,” waiting for one of her children to finish practice, says Haddad. “It’s clear she’s fully engaged with her family, but she also manages to be fully engaged with the work she takes on.”

Mueller attributes some of that perspective to her clerkships. “I learned from both Judge Wald and Justice Stevens the value of politeness and civility. They were invariably tough in oral argument,” asking pertinent questions that probed weaknesses, but they “did it in a way that was both civil and polite,” Mueller says.

“I wish more judges would be like that,” she says. “You don’t have to be nasty or personal to make a point or to be a zealous advocate.”

Mueller also offers advice for those who might be considering her path. First of all, she says, be sure you love doing what you do. “I love being a lawyer,” she says. “I was one of the only [few] people that liked law school.”

“When people now ask me about being a lawyer, I say you have to do it because you’re really interested in the law, and not because it makes you a lot of money or you want colleagues to think you’re a smart person,” she says. That’s also why she knew she didn’t want to be on the partner track at a firm. “Sidley doesn’t expect me to be responsible for the management of the firm or all the financial part that goes with it,” she says.

As for the part-time schedule, that, too, requires a certain sense of limits and a full understanding of what part-time is. Her in-office hours add up roughly to 35 hours a week. But many days find her working in the evening as well.

Since she concentrates on appellate litigation, most of the time her schedule is predictable. Then again, she says, there are days when she works from 10 p.m. to 2 a.m. to finish a brief.