From Starting a Hive to Going Into Dark Social, Practice 360° Looks at Ways to Build Community

Several sessions focused on establishing and cultivating communities to improve business. In “How Hive Mind Can Help Your Law Firm,” four members of a working group formed by eight local law firm founders shared how they came together to exchange information and seek advice about law firm management, business development, and meeting their professional goals. Members refer to the group as “the hive” or “the mastermind.”

Established prior to the pandemic, the group includes attorneys from a broad range of practice areas and experience and facilitates sharing of ideas about how to confront tasks and problems that many lawyers may find daunting if they were going it alone. 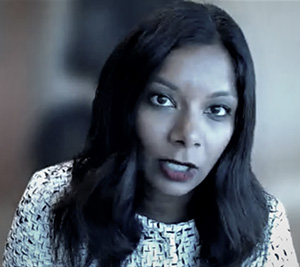 Pratibha Agarwal, principal shareholder of Agarwal Law Group, said the group has a Slack channel, but it also has optional Friday meetings, formal monthly meetings, and an annual retreat to touch base and brainstorm.

“The intention is that when we have that one pressing issue in the middle of the day and [can] use some feedback or some ideas about how to deal with it, we [can] send out a blast to our mastermind and get their sage advice,” Agarwal said.

On Friday mornings the group holds its “power hour,” when members dial in and discuss a task they have set out for themselves, often one that they’ve been putting off. After stating their individual goals for the following hour, the group breaks, reporting back on their progress when the time is up.

Monthly meetings typically draw full attendance, as does the annual retreat. Chun Wright, principal of The Law Office of Chun T. Wright, said that the power hour provides a regular touchpoint for the group, whose importance in combating the isolation of solo practice was amplified during the pandemic. Wright said the group is eager to return to in-person gatherings for easier interaction among members. 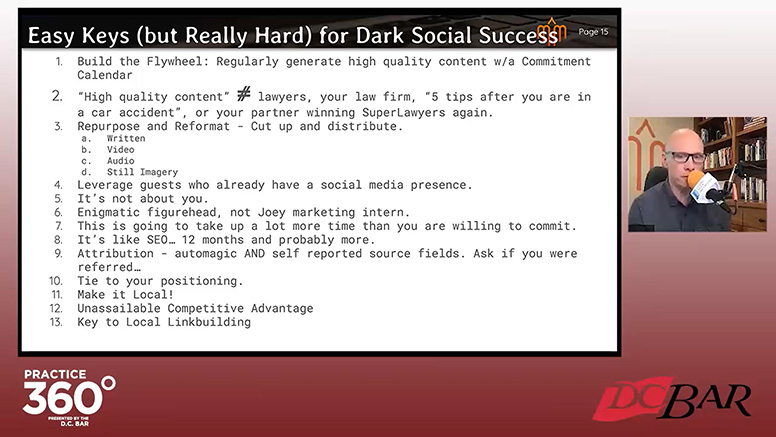 Another session covered a different yet still valuable way to develop community — “dark social,” the practice of sharing content that cannot be tracked by web analytics tools. The term was coined in a 2012 Atlantic article about the volume of internet content that is effectively untrackable, running contrary to business school models of attribution, said Conrad Saam, founder and president of the legal marketing firm Mockingbird.

Saam said that dark social content is very rarely about lawyers or the law. “It’s because legal content is boring. It’s also kind of a gauche topic to be talking about,” he said. “It’s not about you. You have to make it about everybody else. You can’t leverage other people’s networks if what you are talking about is how great you are.”

On the other hand, he also indicated that it is critical that dark social efforts be led by a leader at the firm. Dark social is about brand building, and for it to be effective, the name on the door needs to be the brand being built.

Saam offered examples of a handful of attorneys that he said were effectively employing dark social. Chicago attorney Ken Levinson, for instance, uses social media to document his passion for the area food scene, tagging restaurateurs on his posts and generating a sizeable following in the process.

As a result, Levinson has created a referral network made up of people interested in food and in the Chicago area. “Not one of them knows if he’s a good lawyer or not,” Saam said. “They probably don’t even care or have a way of assessing that. What they know is that he’s interested in something that they’re interested in and that he’s supporting these small restaurants through COVID. Game on! Do that all day long.”

“The trick here is that you can’t do a post and expect 113 likes, 23 comments, and one share the next day. It’s not going to happen. He’s been doing this a long time. There’s a flywheel effect, which again is why most of you are not going to take the time to bother to do this,” he added.

Saam cautioned that dark social takes “a lot more time than you think,” and that its very definition ensures that the results will be difficult or impossible to attribute to one’s dark social efforts, although this might not be a problem.

“I used to exhort law firms to stop asking the question ‘how did you find us’ because the answer was so often wrong,” Saam said, noting that the most common responses are “the internet” or “Google,” and those answers are not particularly helpful for a solo practitioner, for example, to decide whether to increase pay-per-click spend.

But dark social’s less trackable results might be liberating, Saam said. “This is jazz, not classical,” he said.