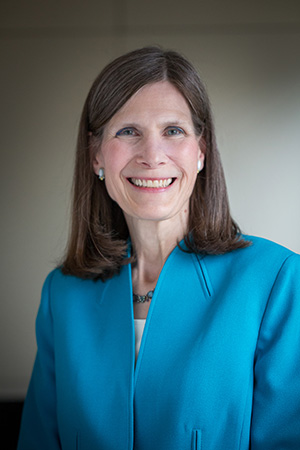 Susie M. Hoffman, public service partner at Crowell & Moring LLP and former D.C. Bar president (2019–2020), will receive the Washington Council of Lawyer’s (WCL) Presidents Award on December 2. The annual awards ceremony honors exceptional lawyers and law firms in the District that have dedicated their time and talent to pro bono service, public interest law, and the advancement of access to justice.

Hoffman has devoted more than 30 years of her legal career to pro bono and public interest advocacy. At Crowell & Moring, she became the firm’s first public service partner. She has litigated numerous cases involving child abuse and neglect, domestic violence, and child custody. Hoffman has also served as a faculty member for the D.C. Bar’s Child Custody and Domestic Violence training courses. She has spent many hours volunteering to help feed the homeless at soup kitchens sponsored by So Others Might Eat, St. Maria’s Meals, and Loaves and Fishes.

“Susie is a champion of pro bono, an unparalleled trailblazer in the public interest community, and has been an integral part of the Washington Council of Lawyers,” says Christina Jackson, WCL’s new executive director. “Susie is a longtime board member and twice has served as board president. [She]brings a unique blend of kindness, intelligence, humility, and passion to her tireless work to advance access to justice. She soars among legal luminaries but also is down-to-earth.”

Because the WCL is celebrating its 50th anniversary, Hoffman says being honored with the Presidents Awards is especially meaningful. “The other thing that makes it extra special and a little humbling is that the people who make the selection are the past presidents of the Washington Council of Lawyers,” she says. “I know almost all of those folks and I respect them. It’s really special.”

Hoffman argues that providing pro bono legal services to the less fortunate is transformative for the clients, the volunteering attorney, and in some cases the political landscape. “When you have a client, say the NAACP, and you work on voting rights cases and have a major victory, you can have an impact on thousands of voters,” she explains. “I think for many attorneys, it’s really transformational when we are able to use our skills that can really change lives.”

During her term as D.C. Bar president, Hoffman won the American Bar Association’s (ABA) Best President’s Column award for her Washington Lawyer magazine essay, “Losers: Our Unsung Heroes,” which emphasized the importance of public defenders and other attorneys who represent individuals with losing cases but do so to preserve the integrity of our justice system.

In the June 2019 issue of Washington Lawyer, Hoffman credited her stay-at-home mother with instilling in her the need to give back to the community while growing up in the Midwest. After her second year at Indiana University, Hoffman was divided between choosing a career in law and social work. She interned at the juvenile probation department in Fort Wayne, Indiana, shadowing a social worker who served as a probation officer.

“During the court proceedings, it struck me the lawyer had the ability to have a greater impact on the outcome for the client than the social worker did,” Hoffman told Washington Lawyer. “Being a lawyer would give me the tools to make a difference.”

After earning her bachelor’s degree in political science and government, Hoffman attended the George Washington University Law School. Afterward, she clerked for Judge Harold H. Greene at the U.S. District Court for the District of Columbia. She worked at Hogan & Hartson for eight years before joining Crowell & Moring in 1988.

In addition to her role as D.C. Bar president, Hoffman has served as president of the D.C. Bar Pro Bono Center board and for two terms on the D.C. Bar’s Board of Governors. She was on the D.C. Bar Foundation’s board from 2011 to 2017, serving as its president between 2015 and 2017. She’s the founding board chair of the Domestic Violence Legal Empowerment and Advocacy Project. Also, between 2009 and 2013, she was co-chair of the D.C. Circuit Judicial Conference’s Standing Committee on Pro Bono Legal Services.

Today, Hoffman serves as chair of the ABA Death Penalty Representation Project, as a commissioner on the D.C. Access to Justice Commission, and as vice president of the Washington Legal Clinic for the Homeless Board, and on the D.C. Bar Pro Bono Committee

“[Hoffman] is a true servant leader,” Jackson says. “And we are honored to recognize her at our awards ceremony.”