On April 7 the chief judges of the District of Columbia federal courts honored 39 Washington, D.C., law firms for their outstanding leadership and commitment to volunteer service over the past year. The 17th annual 40 at 50 Judicial Pro Bono Recognition breakfast, held virtually this year, recognized firms where at least 40 percent of attorneys dedicated 50 hours or more to providing free representation to low-income clients and charitable organizations. 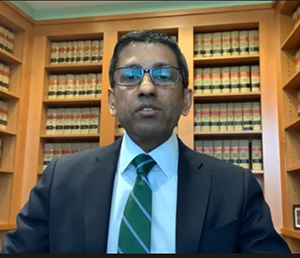 Newly appointed Chief Judge Sri Srinivasan of the U.S. Court of Appeals for the D.C. Circuit framed firms’ efforts in the context of the challenges presented by the pandemic. “It’s no surprise that the need for your work has become more pronounced over the last year,” he said. “Here in Washington, scores of people have filed for unemployment and fallen behind on their rent. Domestic violence incidents have risen, and families are confronting more uncertainty than ever. The hardships have fallen particularly heavily on those who have already borne the most significant challenges, and even with the recent growth in the size of our legal services community, D.C.’s poverty lawyers can handle only a fraction of the legal needs of those who can’t afford to pay for a lawyer.”

Judge Srinivasan said the District’s unique character as a jurisdiction with a remarkably high population of attorneys gives it singular capacity to meet the legal needs of the unrepresented. He credited the District’s many large firms and their culture of public service as providing both the capacity and the inclination to give assistance.

“We’re uniquely positioned to promote access to justice for those who cannot afford to pay for counsel, and thankfully your firms are leading the way,” he said. “I congratulate all of you for upholding the highest values of our profession.” 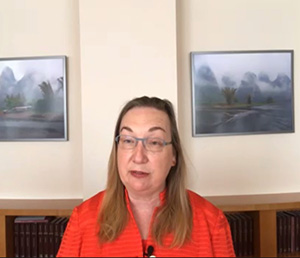 U.S. District Court for the District of Columbia Chief Judge Beryl A. Howell acknowledged firms that exceeded the 40 at 50 benchmarks in 2019 or 2020. She noted that when the D.C. Circuit Judicial Conference Standing Committee on Pro Bono Legal Services first launched the 40 at 50 pro bono event in 2004, only seven law firms qualified for the recognition. Judge Howell applauded the steady increase in the number of firms that not only qualify for but also exceed the threshold, particularly in light of challenges over the past year.

Judge Howell also drew attention to the Pro Bono Work to Empower and Represent Act of 2018, which “calls upon the chief judge in each judicial district across the country to lead public events promoting pro bono legal services as a critical way in which to empower survivors of domestic violence, dating violence, sexual assault, and stalking and engage citizens in assisting those survivors.”

Howell cited National Domestic Violence Hotline figures showing a 9 percent increase in contacts during the pandemic and a report by the Women’s Task Force of the District of Columbia Interagency Council on Homelessness that found that a third of the women surveyed experienced housing insecurity on account of violence. The report also found that more than half faced violence or threats to their safety during their period of homelessness.

“Most importantly for us, this morning, these women identified legal services as one of the top 10 resources that they needed,” Judge Howell said.

Eric Angel, executive director of the Legal Aid Society of the District of Columbia, said that District law firms and lawyers provided more than 70,000 hours of pro bono work through his organization over the past two years. “Legal Aid is just one of many great legal services organizations and public interest organizations to which your lawyers volunteer,” he said, urging attendees to pause and consider the lives changed by this commitment.

He went on to recount the story of a domestic violence case recently represented by a volunteer. The case involved “Ms. Jones,” a woman with an infant child whose father had repeatedly assaulted her, pointing a firearm at her and striking her until she fell unconscious. The Legal Aid Society was able to secure a protection order and full custody for her. Pro bono attorneys received the case when the father challenged the protection order.

“Ms. Jones had an attorney with her every step of the way, and I can only imagine how difficult it would have been for her to manage this on her own, certainly once the pandemic came, but they then proceeded to have a remote trial during the pandemic in which she received everything she was looking for,” Angel said. The pro bono attorney responsible for her representation went on to request another case within a week of the matter’s resolution, he added.

“I hope that concern for our neighbors living in poverty in D.C. is indeed contagious,” Angel said, echoing comments by the chief judges calling upon attorneys to redouble their efforts as the anticipated end of moratoria on various kinds of lawsuits present a significant threat to the District’s most vulnerable population.