The question of how to protect cultural property during armed conflict has become highly relevant in recent days. Russia’s invasion of Ukraine threatens many of the country’s interests, among them art, monuments, and other treasures through theft or destruction. A March 1 panel discussion organized by the D.C. Bar Arts, Entertainment, Media and Sports Law Community provided an overview of the international legal landscape relating to the protection of cultural property during armed conflict and considered effective and unsuccessful efforts during recent wars.

Channah Norman, chief counsel of the U.S. Army Museums and adjunct professor of museum studies at the George Washington University, said that there are several ways in which conflict jeopardizes cultural property. “First, we have direct or collateral damage, which may occur when conflict zones are in close proximity to cultural heritage sites. Second, the turmoil accompanying conflict often leaves archaeological sites and cultural institutions like museums open to looting, and third, parties engaged in conflict may intentionally destroy cultural property as a means of making a political or theological statement,” Norman said. 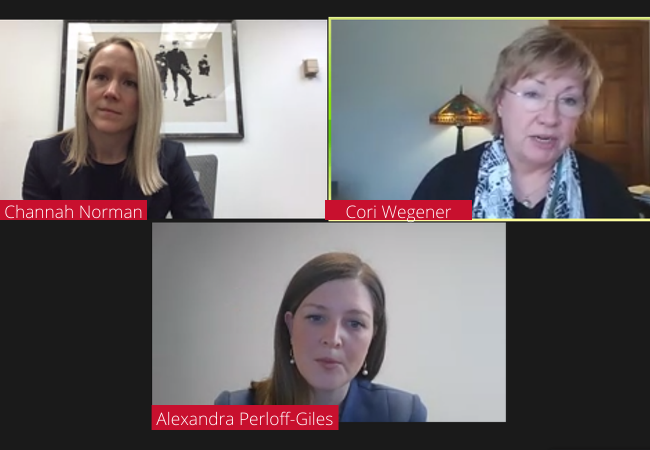 The 1954 Hague Convention for the Protection of Cultural Property in the Event of Armed Conflict established the first safeguards and remains the primary international agreement regulating the protection of cultural property during conflict, Norman said. Written in the aftermath of the deliberate cultural assaults of Nazi Germany on foreign and domestic enemies, the preamble characterizes damage to the cultural property of any people as damage to the global cultural heritage.

The convention requires that nations safeguard and protect cultural property both in war and peace, Norman said. Article 3 requires nations at peace to plan to protect their cultural property, and Article 4 prohibits the targeting of heritage sites or their use for military purposes except in cases of military necessity, a recurring term in the convention. Under Article 5, an occupying nation has an obligation to work with the occupied nation to protect and preserve cultural property. Articles 16 and 17 outline use of a blue shield emblem to identify cultural property for protection.

Protocols added in 1954 and 1999 regulate the movement and treatment of cultural property during conflict and narrowed the potential interpretations of “military necessity,” restricting the exercise of this function to situations where cultural property has, by its function, been made a military objective and there is no foreseeable alternative to obtain similar military advantage elsewhere. Norman said that the United States signed the convention almost immediately but didn’t ratify it until 2009.

Corine Wegener, director of the Smithsonian Cultural Rescue Initiative, described the discussions leading up to the U.S. ratification of the convention. She said that reluctance to adopt it previously was attributed to Cold War tensions and concerns that the Soviets would deploy blue shield protections dishonestly as a means of defense in conflict.

The convention requires that countries designate officers within the military that coordinate activities intended to protect cultural property. Wegener served such a function in her role as a monuments officer with the U.S. Army Reserve during the second Gulf War. She described coordinating with local government officials, paying for higher fences around museums, funding the arming of guards for cultural heritage sites, and informing the U.S. military of the significance of these sites.

The U.S. effort to establish and staff a cultural expert group has only been moderately successful. Many other countries that are party to the convention have failed to establish corps of experts that can liaise between civil and military authorities. “It’s just a handful of countries that have gone ahead and added that capability to their military force,” Wegener said. “We want every country to have some point of contact we can point to [as] the cultural property person who is working with civil affairs.”

Speaking about the current conflict in Ukraine, Wegener said that government activity is not the only way for people interested in preserving cultural property to get involved. “What we can do now is use all of our channels, all of our social media, to express our support for our brave Ukrainian colleagues who are going through this. Support them, support those that have had to leave the country, as well as those who have made the decision to stay, and figure out how we can support them,” Wegener said. On social media, use of the hashtag #culturecannotwait can help raise visibility and awareness, she added.

Lawyers, in particular, can play important roles. Wegener said that participation in nonprofit organizations such as Geneva Call, which urges armed nonstate actors to comply with international humanitarian law, can help address both human rights and cultural property protection issues.

Just a day following the event, Ukrainian officials alerted the international community that Russia had bombed a site at Babi Yar memorializing the Nazi massacre of tens of thousands of Jews during the World War II. The news drew international rebuke.