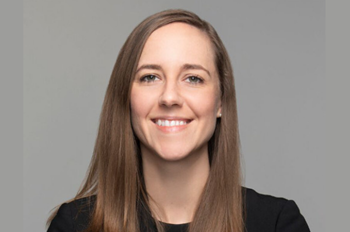 & Fitch, P.C. (KCNF), it was the next step in building her career as a labor and employment lawyer. Previously she was the acting director of the Office of Labor Relations for the Massachusetts Department of Revenue, where she had started as an intern while attending New England Law, Boston.

“I decided to practice law in D.C. because my wife and I moved to the area from New England to be closer to my in-laws. I was lucky to find my home at KCNF almost immediately … and I don’t miss the blizzards,” says Baker-Pham.

As an associate at KCNF, she also found a new focus in the employment law realm. Baker-Pham serves as co-chair of the firm’s security clearance practice while also advocating for employees on matters relating to discrimination and retaliation, discipline, and whistleblower protections.

How did you become interested in security clearance practice?

I first became interested in security clearance work through talking with my colleagues who were updating an earlier edition of KCNF’s Security Clearance Law and Procedure. When I later joined the security clearance practice group, I immediately enjoyed the challenge. On the one hand, effective representation in clearance matters requires the same attention to detail and interpersonal skills that I used representing plaintiffs in employment cases. On the other hand, it is also vital to understand the government’s complex and evolving interests. When it comes to security clearances, the stakes are high for the government, and adjudicators will resolve any doubt in favor of national security.

What does your work entail?

In our practice, we work with people who are trying to obtain or maintain a security clearance or eligibility to hold a sensitive position. We advise on clearance applications, investigations, and self-reporting of potentially adverse information and, if needed, represent the individual at a hearing or personal appearance. We also advise other employment attorneys whose clients’ legal issues implicate their clearance.

The most common reason for adverse decisions is … financial issues, including past-due debts, late taxes, and more obvious issues like financial crimes. Unexplained wealth can also raise concerns. Although personal finances may seem unrelated to whether a person should be trusted with access to classified information, the government is interested in what a person’s finances may reveal about self-control, lack of judgment, or unwillingness to abide by rules and regulations. Other common issues we see at various stages include ties to foreign countries (especially countries hostile to the U.S.), “personal conduct” (allegations regarding questionable judgment, lack of candor or dishonesty, or an unwillingness to follow rules and regulations), marijuana use, marijuana use, and marijuana use. Did I mention marijuana use?

No single issue, however, is a bright-line disqualifier. For every concern, the adjudicator must — under the federal government’s guidelines — consider mitigating factors and the “whole person” before making a decision regarding the person’s eligibility for a security clearance.

How has the pandemic impacted your practice?

We have not seen COVID restrictions impact clearance cases. In fact, security clearance investigations have likely sped up a bit because investigators are now authorized to conduct interviews via Zoom.

What are the unique challenges in representing security clearance holders in whistleblower cases?

Whistleblower protections are complicated as they relate to security clearance holders. Clearance holders, as with all federal employees, are encouraged to come forward when they know of violations of law, rule, or regulation; gross mismanagement; gross waste of funds; abuse of authority; or substantial and specific danger to public health or safety. Clearance holders, however, must also ensure that their disclosures do not reveal classified or sensitive information to an unauthorized party. Clearance holders are also uniquely vulnerable to retaliation — adverse actions that impact security clearance eligibility are not appealable through the most common whistleblower fora such as the Office of Special Counsel or the Merit Systems Protection Board. Instead, clearance holders must use processes established under a 2012 presidential policy directive. Our practice works closely with KCNF’s whistleblower expert on these issues.

What advice would you give to other attorneys interested in this practice area?

Reach out to an attorney who practices in the area, read through decisions on the Defense Office of Hearings and Appeals website or in Westlaw, and consider taking Mark Zaid’s D.C. Bar Continuing Legal Education class on representing clients in security clearance cases. We have seen clearance holders burned by attorneys who come into a case assuming that effective advocacy is the same as in traditional litigation (it is not), or making arguments that are contrary to the adjudicative guidelines. Finally, it is incredibly important to keep in mind that a clearance holder’s eligibility has the likelihood of impacting their ability to hold [not only] their current position but [also] any sensitive position. An adverse decision will likely have a career-changing effect.