Crime, policing, abortion access, and the D.C. attorney general and mayoral races are top of mind for District residents. At the D.C. Bar District of Columbia Affairs Community’s annual Meet the Press on June 2, local journalists discussed the current hot issues in their coverage, including the notable candidates in the D.C. political scene. Their analysis provided some important distinctions between candidates in political races where there has been significant consensus on some of the more pressing topics.

On the issue of crime, for example, WAMU political analyst Tom Sherwood said that all of the mayoral candidates support the expansion of violence interruption programs, but Mayor Muriel Bowser, who is seeking a third term, appears to be the only candidate whose platform includes an expansion of the existing police force. 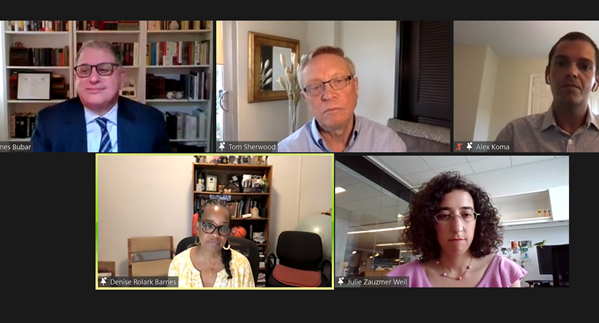 At recent budget hearings, however, Barnes said that four D.C. Council members reversed their positions, seeking to strike provisions cutting budgets for school resource officers in light of recent school shootings. “I think that what we’re seeing around the country is that we probably need some kind of formal security in the schools,” Barnes said.

The panel also discussed threats to abortion access following the leak of a U.S. Supreme Court draft opinion in May overturning Roe v. Wade. Washington Post reporter Julie Zauzmer Weil said that even if there were no immediate changes to access by District residents, the impacts elsewhere would immediately be felt. “Right now, if you look at the abortions that take place in the District, a pretty large percentage of them are for women from out of state … sometimes from quite far out of state,” she said. Stricter abortion laws elsewhere might lead to a dramatic increase in those coming to seek services in the District, Weil said.

Local political officials are united in their support for abortion access rights, the panelists said, but the District’s unique political status means that congressional interference could still affect the rights of residents if Roe is ultimately overturned. “D.C. can only really do things around the margins without total control of its own affairs,” Washington City Paper reporter Alex Koma noted.

If media statements regarding political trends are to be believed and Republicans strengthen their positions in the midterm election, Sherwood said the results would be poor for District residents hoping to maintain the status quo. “I don’t see the Democrats on Capitol Hill rushing to save the District of Columbia,” he said. “I don’t know how much political capital they will spend on our little city, so we could see severe restrictions on abortion. We could see open-carry gun laws come through Congress. We could see restrictions on marijuana. We have a dark winter coming if the Republicans take over the Congress.”

The panelists largely agreed that the District’s efforts to achieve statehood were likely a mirage, though there was some debate regarding the conditions under which the odds of success might change. Weil suggested that the elimination of the filibuster might result in District statehood, while Barnes said that, ironically, the elimination of home rule might galvanize residents in their demands for equal representation in government.

In local politics, the panelists acknowledged Mayor Bowser’s strong position in seeking reelection. Rising crime and housing costs were cited as the sources of discontent, providing some limited leverage for competitors, but the journalists expressed skepticism that these issues would be enough to unseat Bowser.

The panelists showed a greater degree of uncertainty regarding the likely outcome of other local elections. The race for D.C. attorney general and the open Council seats in Wards 3 and 5 lack incumbent candidates. The Council chair position and the at-large and Ward 1 seats present some potential for an upset, according to the speakers, because the incumbents are facing particularly strong challenges.