Alessandra Carozza was in a multitasking zone: giving a presentation on a client call from home during the pandemic while her one-year-old son Matteo played on the floor near her. Her husband, also working at home, was elsewhere. The client had questions, and she started to answer them. 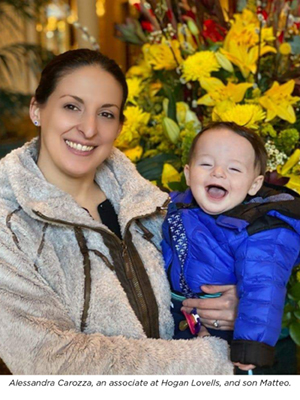 Suddenly, Matteo sat — or plopped — down on her keyboard, which was resting on the floor. That was the end of the client call. All she could do was laugh.

Luckily, she says, the client understood. “Maybe if it had been a different client...,” says the associate with Hogan Lovells. Her voice trails off.

You thought law school was tough? You imagined taking the bar was a challenge? Getting that first job? Life for D.C. attorneys with children at home these days has demanded a whole new level of concentration, patience, flexibility, perseverance, and sense of humor.

Shelley Vanneman, a staff attorney for the office of D.C. Mayor Muriel Bowser, was on a Zoom meeting when she realized she was looking at her own face — and that of her big black dog, which had figured out a way to open the door to the room and wanted to announce she was ready for a walk. In case Vanneman didn’t get the message, the dog started barking. She’s not sure what happened to the rest of the family — her husband, her 13-year-old daughter, or her 11-year-old twins. 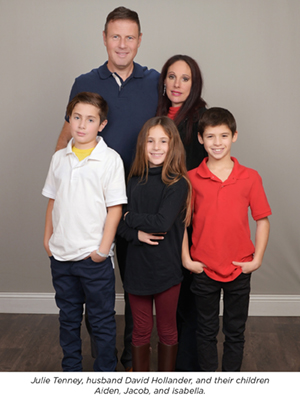 “The days just go by,” says Julie Tenney, a Department of Justice attorney. “All of a sudden you’re a camp counselor, cook, barber.” Not to mention all the extra cleaning that comes with multiple people eating every meal at home, she adds. Since her husband works for an accounting firm, he’s been putting in 60 to 70 hours a week at home, so childcare has fallen on her completely.

One solution she found was a daily five-mile hike with her 11-year-old and twin nine-year-olds after they finish their morning schoolwork. But with all this extra kid-focused attention, she finds herself working seven days a week to make up for the hours she can’t put in during the workweek. 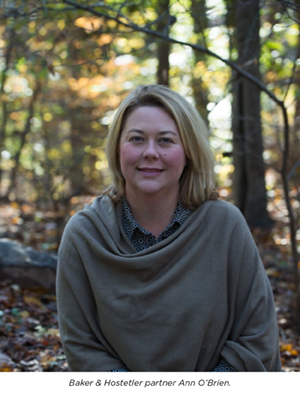 Other parents with school-age children start each day with a family check-in. Ann O’Brien, a partner with Baker & Hostetler, says the whole family — an attorney husband, a 13-year-old, and a 10-year-old — puts important events on the family calendar. Each morning, “We will make sure they’ve had breakfast, who has what Zoom calls, and what assignments. Then I tell them my schedule, and we are off, unless they need us. I tell them, ‘Here are the times you cannot interrupt Mom or Dad.” She’s been known to lock the office door.

Michael Bogomolny, a Commerce Department attorney, says he, his wife, and their five-year-old daughter have weekly family quarantine meetings, where each of them can brainstorm problems or make commitments. 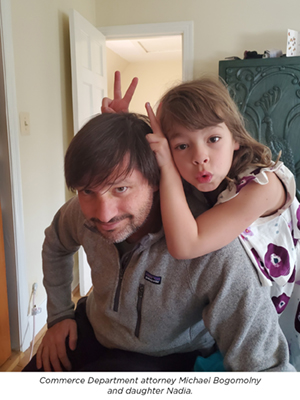 Even his daughter Nadia’s dolls take part, Bogomolny says. “She’s been using her dolls a lot more recently to talk through emotions,” he says.

Bogomolny’s wife has chronic health issues, so he is the primary caretaker. That means he works part-time mostly at night, he says. “One of the benefits of working for the government is that there is a flexible schedule,” he adds.

Michael Weitzner, an attorney with Cooper & Kirk, has three children — 13, 11, and 6 — and a wife who is an in-house counsel. All of them have carved out space for working in their home, he says, and the youngest child has spent hours on FaceTime chatting with her nanny in Spanish. Another lucky break is that his mother-in-law is a retired English teacher who has spent time with all three children working on their writing. “They get to see a different aspect of their grandmother, too,” he says.

Carrie Garber Siegrist, an associate with Faegre Drinker, has been working from home with a four- and a six-year-old. “In the beginning of all of this, it seemed like there would be more time,” she says. There would be no commute time, no need to dress for the office, no minutes spent dropping children at school. Instead, the challenges have grown.

At first, Siegrist and her husband, an engineer, had a live-in au pair. But when her term ended and she had to go back to Brazil, Siegrist and her husband have been staggering the responsibilities. They’ve developed a plan for emergencies: If one person has an urgent meeting, they are allowed to “tag out,” no questions asked, while the other parent takes over. “It’s a very serious honor system,” Siegrist says.

Carozza and her husband, who works in government relations for an energy company, also have a plan of taking five-hour shifts. When Matteo goes down for a nap, they both work. When he’s down for the evening at 6:30 p.m., they’re both back on their laptops until 11 p.m. or midnight. Since Carozza does white-collar investigations, “As long as I get the work done and the hours billed, it doesn’t matter when I do them.” 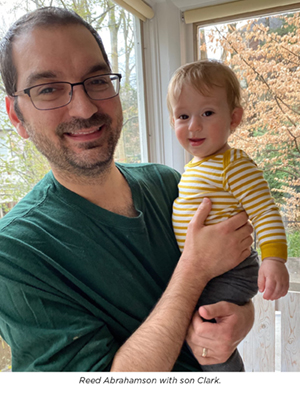 Reed Abrahamson, an associate with Faegre Drinker, and his wife, who is also an attorney, are parents to a toddler. There is no real structure with an 11-month-old boy. “If he doesn’t want to take a nap for another half-hour, then he won’t,” Abrahamson says.

The initial plan was for each to take two-hour shifts. “We made that work, more or less, for three weeks, then we broke down and called my parents,” who drove to Washington, D.C., from South Dakota. “It’s been a huge help,” he says, even though his parents are running a home-based business. Now four adults each take two-hour shifts.

Talia Primor, an associate with Mintz Levin in New York, and her husband, also an attorney, have a 20-month-old son, Shai, who is a good sleeper. But in their cozy two-bedroom Brooklyn apartment, the parent who is not working is fully on duty, she says. And even when Shai’s asleep, she laughs, she’s taken the occasional business call from the bathroom to separate the office space.

In some ways, if working from home is hard for parents, it’s even harder for the children. Bogomolny’s daughter is a “very gregarious child,” he says. “She’s finding it to be cruel and unusual punishment to be kept from interacting with her peers.” He thinks the age of five is the hardest in terms of pandemic rules: she’s too old to nap and “too young to be reading a book unassisted,” he says.