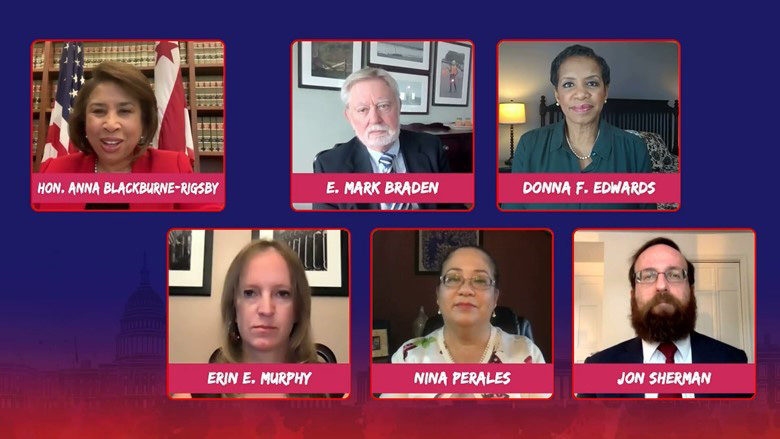 The D.C. Bar’s two-day 2020 Virtual Conference continued on Wednesday, October 21, with heavy-hitting sessions on the current state of voting rights and a look toward the future. Moderated by D.C. Court of Appeals Chief Judge Anna Blackburne-Rigsby, the morning plenary session focused on barriers to voting as well as election litigation.

Donna F. Edwards, former U.S. representative of Maryland’s 4th congressional district, led off the discussion by reflecting on the conference’s centennial commemoration of the 19th Amendment. Edwards expressed her challenge as a Black woman celebrating this milestone, mentioning that her grandmother didn’t receive the right to vote until the Voting Rights Act was passed in 1965.

“I think about the Voting Rights Act and where we are now,” Edwards said. “We are having the same conversations about who gets in and who’s left out and [about] the barriers in place.”

Nina Perales, vice president of litigation of the Mexican American Legal Defense and Educational Fund, echoed Edwards’s concerns about barriers to voting. In Texas, for example, laws have made voting less accessible to Latino voters, she said. To help people register to vote, residents must be trained and then deputized by county election officials, but the deputization expires after two years.

Litigation Landscape
Jon Sherman, senior counsel at the Fair Elections Center, reported a number of pending voting rights lawsuits. Prior to the pandemic, many cases involved signature matching, restrictions on who can collect the ballots, and absentee ballot “cure” procedures. “But they have been brought in greater numbers and greater intensities because of the pandemic,” he said.

Given the current health crisis, today’s key legal issues include absentee eligibility, challenges to witness requirements for absentee voting, extension of receipt deadlines, and ballot delivery fail-safes. Many of these cases are brought to federal courts instead of state courts, Sherman said.

Erin Murphy, a partner at Kirkland & Ellis LLP, noted that the U.S. Supreme Court most likely would not get involved with recent voting rights cases, especially after Shelby County v. Holder, the 2013 landmark decision that removed federal preclearance requirements so states could implement changes to their voting laws and practices.

“[Pre-Shelby] there was an explosion in state legislation [regarding restrictions] on voter ID and voter registration,” Edwards said. “That has created the problems we are now seeing in the current election. If you look at what’s happening in South Carolina, a lot of this stuff is directly related to what I describe as Shelby on the loose, and the fact that we haven’t been able to have Department of Justice intervention to make sure that there is fairness in this [voting] process.”

Sherman had reservations about moving into election litigation: “I’m quite skeptical of litigation. My experience with most of litigation is that you can’t abstract partisanship from the litigation.”

Concerns for the Future
Myles Lynk of the D.C. Office of Disciplinary Counsel moderated the day’s second plenary discussion, which explored alternatives to in-person voting and technological issues in play.

At the beginning of the conversation, Amber McReynolds, CEO of the National Vote at Home Institute and Coalition, presented data showing an increase in mail-in voting between the 2016 and 2020 U.S. presidential elections. “More than 15 million people will have voted [early] in this election cycle,” she said. “There are jurisdictions with over 40 percent turnout right now.”

In terms of reform measures to protect the democratic process, McReynolds recommended the modernization of voting and registration procedures, such as automatic and same-day registration. Ajay Saini, counsel for the Lawyers’ Committee for Civil Rights Under Law, proposed reinvigorating the preclearance regimen in the Voting Rights Act and having a federal effort to address partisan gerrymandering.

Lucy L. Thomson, founding principal at Livingston PLLC, cited various cybersecurity issues that could impact the current electoral process. “Technology has become a cornerstone of our electoral system. Technology introduces vulnerabilities that have made it possible for Russia and other foreign nations to successfully attack our election system,” she said.

Thomson noted that most of the Unites States’ election equipment is vulnerable to cyberattacks. “Outsourcing elections is less well-known but a very serious problem,” she said. “Election companies — three of them primarily — play a pivotal role in the elections. They manufacture voting machines, design ballots, maintain voter registration, tally votes, and host results websites. They are prime targets for hackers.”

To protect against these threats, Thomson recommended requiring cybersecurity measures of the private sector companies that manage elections and technology, defining cybersecurity standards for election technology and making those mandatory, and ensuring that federal funds for elections are used to secure electoral equipment, combat misinformation, and increase digital literacy and civic education among voters.

Despite the risks, technology will have an increasing role in shaping the future of voting rights. John C. Yang, president and executive director of Asian Americans Advancing Justice, pointed out, however, that the United States needs to address the digital divide across the country. “About 42 million people in the United States, according to some estimates, do not have broadband access,” he said. “So, what does that mean for their ability to get information about voting or exercising their right to vote?”

Voting Rights of the Incarcerated
D.C. Superior Court Judge Rainey R. Brandt moderated an invigorating breakout session on how incarcerated people can vote in the 2020 election and the challenges facing them. In July 2020, the D.C. Council unanimously passed a justice reform bill that extended voting rights to D.C. residents who are currently incarcerated on felony charges; however, District officials are learning how hard it is to carry out that intention. 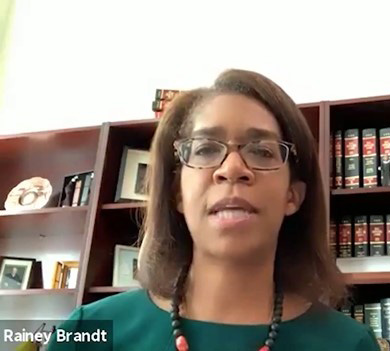 “Six million people [nationally] were unable to vote during the [2016] election season because of varying categories of disenfranchisement,” said Marc Mauer, senior advisor to the Sentencing Project. “In the criminal justice system, we see extreme racial disparities in how felony disenfranchisement plays out nationally. One out of every 13 African Americans is ineligible to vote because of a current or previous felony conviction.”

“Of the 48 states that disenfranchise people who are incarcerated for a felony, 30 of them also disenfranchise individuals on probation and/or parole,” Mauer continued. “In 11 states, even after the period of supervision is legally over, you still lose the right to vote. And that could be for a lifetime.”

Michelle Wilson, attorney advisor for the District’s Department of Corrections, reported that the city has a voting coordinator for incarcerated D.C. residents who distributes and collects registration forms and sends them to the Board of Elections. Because of the pandemic, the coordinator will be collecting the ballots instead of having incarcerated individuals go to a polling site in jail.

Apathy toward voting and lack of knowledge of the candidates are some of the challenges facing incarcerated people. Others include not having money to buy stamps to request an absentee ballot and mistrust in the U.S. Postal Service.

Wilson encouraged D.C. Bar members who represent incarcerated clients to ask their clients if they need assistance in voting, and to reach out to the Department of Corrections to address their challenges.