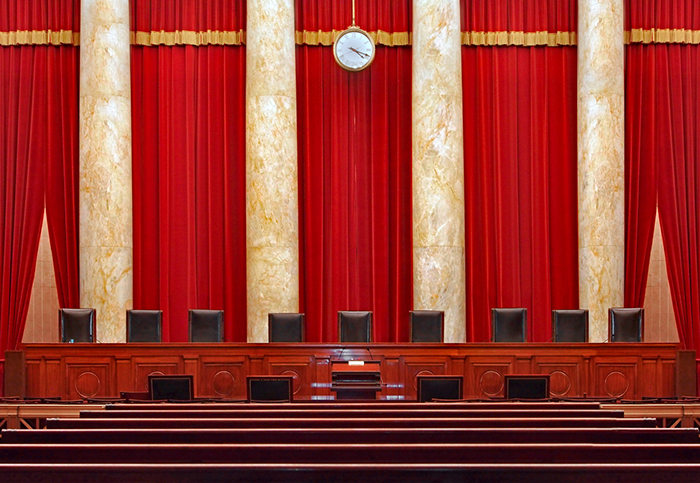 United States Supreme Court nominee Amy Coney Barrett bears certain similarities to Justice Ruth Bader Ginsburg, whom Barrett would replace if confirmed by the Senate. Both are women who graduated at the top of their law classes. Both went into teaching, and both brought firmly established judicial philosophies to the Court. And that’s where the similarities end, constitutional scholars say.

Where Ginsburg was a reliable liberal vote, Barrett will be a dependable conservative on the Court. Barrett’s appointment would shift the Court under Chief Justice John Roberts from a 5–4 split, with Roberts as the “institutionalist” swing vote in the most recent term, to a likely 6–3 conservative majority on many issues.

“If successful, this would likely be the most consequential and transformative nomination in the history of the modern Court,” said Jonathan Turley, a professor of law at George Washington University Law School (GW Law). “To replace a consistent vote from the left with an equally consistent vote on the right would be transformative in areas ranging from abortion to college admissions to discrimination law.”

Barrett is an adherent to the “originalist” school of jurisprudence, a relatively new set of legal theories that only really gained wide acceptance as a legitimate body of thought with the appointment of Justice Neil Gorsuch. Originalism holds that interpretation of constitutional principles should be based not just in the words of the law, but also on the original intent.

“She is a knowledgeable and committed originalist. This is momentous,” said Randy Barnett, a professor of law at Georgetown University and director of the Georgetown Center for the Constitution. “This is a very significant development. This is a big deal,” Barnett added.

“A 6–3 majority will make for a different Supreme Court,” said David Fontana, a professor at GW Law. “Liberal justices have not constituted the majority in 51 years, but there have always been some conservatives on the court who were willing to join the liberals in important cases — most recently Chief Justice John Roberts,” Fontana said.

“Now it appears that there will be at least five justices who will consistently vote against the liberal justices in the large majority of very important cases. This will make for the most conservative Court in some time, and the most divided Court in some time,” he said.

Of course, how Barrett’s judicial philosophy will translate to decisions remains to be seen, but constitutional scholars and practitioners throughout the country are looking for clues to her thinking in her academic writings at the University of Notre Dame Law School, her rulings from the U.S. Court of Appeals for the Seventh Circuit, and, importantly, her clerkship in 1998–1999 for the late Justice Antonin Scalia, a legal hero of conservatives.

“If she adheres to the judicial philosophy of Justice Scalia, as she promises, a 6–3 Court will continue to act as a guardian of free speech and a foe of unjustified excessive regulation of political action,” said Jan Baran, a partner at Wiley Rein LLP who has argued many cases before the Supreme Court.

It is not clear, however, from Barrett’s limited First Amendment case record on the Seventh Circuit that she will adhere to Scalia’s interpretations or deviate from established law.

In two cases decided by the Court, including one in which she wrote the majority opinion, Barrett showed she “will faithfully apply well-established precedent correctly to cases that come before her,” according to an Institute for Free Speech blog. In a third case, her opinion “suggests that she may think differently” than Scalia on some matters, according to the institute.

That said, Barrett’s judicial philosophy certainly presages an ideological shift on the Supreme Court and will be placed under a microscope in her Senate confirmation hearings starting next week.

“Our core principles with respect to health care, reproductive rights, voting rights and election protection, fair housing, and labor laws all hang in the balance,” said Lia Epperson, a professor at American University Washington College of Law. “The current process may affect the rights of generations to come,” she said.

Women’s rights are of particular concern, said Brenda Smith, also a law professor at American University. “In [certain] areas of the law guaranteeing a woman’s right to control her fertility and to plan her family, Judge Coney Barrett has not shown herself to be a friend,” Smith said.

“Originalism is one of a number of tools we can use to interpret the Constitution. It is not the only one,” she added. “The Constitution and our systems of law are living and evolving. We must evolve, change, and include in order to survive as a people and a country.”

Barrett’s adherence to “originalism” notwithstanding, she is more likely to import “her own values and policy preferences, which are profoundly reactionary,” to her judicial thinking where the “relevant legal texts are vague,” according to Cornell Law School professor Michael C. Dorf.

That vagueness is found in “just about everything the Court decides,” Dorf said, including issues of freedom of speech, race-based affirmative action, abortion, guns, and health insurance.

Beyond the issues surrounding the scope and application of individual rights is a larger question about whether Barrett’s addition to the Court presages that it will be more likely to invalidate new, forthcoming legislation.

“The biggest question is whether the move right will mostly be about disputed individual rights cases — abortion, gay rights, religious liberty, guns, affirmative action, etc. — or whether they will also strike down major legislation enacted by a Biden administration and a Democratic Congress,” said Douglas Laycock, a professor at the University of Virginia School of Law.