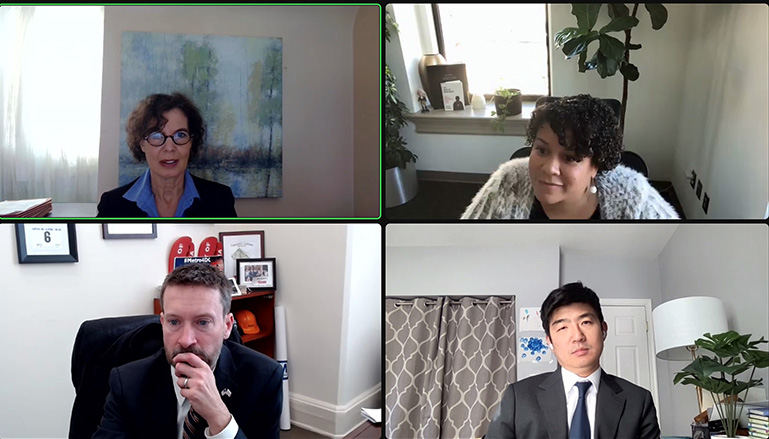 It’s been more than 121 years since Washington, D.C., had a criminal code imposed on it by Congress. The city and the nation have evolved a lot since then, but the District’s criminal code has not. That is about to change.

“It’s one of the most significant pieces of legislation that’s actually ever moved through the Committee on the Judiciary and Public Safety, and, I would dare say, the full Council,” said D.C. Councilmember Charles Allen, committee chair and a leading champion of the bill. Allen, who represents Ward 6, was one of the panelists at a December 1 program sponsored by the D.C. Bar District of Columbia Affairs Community and Criminal Law & Individual Rights Community discussing the proposed criminal code overhaul.

Work on revisions to the code began in 2016 with the establishment of the D.C. Criminal Code Reform Commission, tasked with conducting an exhaustive study of the District’s criminal statutes and providing recommendations to the mayor and the Council.

Jinwoo Park, executive director of the commission, described the drafting and structure of the RCCA, which seeks to define punishable crimes more clearly while implementing criminal justice reforms. The act eliminates most mandatory minimum sentences, allows for jury trials in misdemeanor cases, and reduces maximum penalties for certain crimes.

“It is going to significantly increase the accessibility and the clarity of the code,” Park said. The act would take effect in three years, giving the District’s legal system time to adjust.

The new law is divided into two sections: the first lays out the definitions and generally applicable provisions, and the second defines specific crimes under the code, Park explained. As a result, one of the key innovations of RCCA is the adoption of “element analysis” rather than “offense analysis,” he said.

Patrice Sulton, executive director of DC Justice Lab and a former criminal defense practitioner who served as an advisor to the commission, said the drafting of the new code was “a pretty neutral and objective process.”

“There wasn't a mandate to decarcerate en masse. There wasn't a mandate to write something that was perfectly racially equitable. This was really about the logic, the functionality, and the overall fairness of the code from the perspective of as many stakeholders as possible,” Sulton said. “And that was no easy lift to say to a group of half a dozen lawyers, ‘Go rewrite all the laws in a way that everybody will think is fair,’ and they got pretty close.”

Most of the District’s criminal code was first passed by Congress in 1901, long before the city gained home rule in 1973. Over time, it was amended in piecemeal fashion but never given an overhaul. “As a result, our criminal laws are a mess. They fail to achieve four elements of a modern code — clarity, consistency, completeness, and proportionality,” Allen said.

Definitions of manslaughter, assault, and other crimes are thin or archaic. That leaves it to judges, who are appointed by the U.S. president, to step in and smooth over gaps in the underlying law, Allen said.

“We have a system of penalties that are wildly inconsistent. We don't have carefully graded penalties that allow for nuance in how sentences are structured to match the harm that was caused,” he added.

Indeed, to get a sense of how significant Washington, D.C.’s proposed new criminal code is, it helps to go back 120 years to the turn of the last century when much of the existing code was first adopted, said Allen. There were only 45 states. Women did not have the right to vote. The Civil War was still within living memory. Jim Crow laws were in effect.

Some of the act’s provisions remain controversial, and it is not yet clear if Mayor Bowser will sign the bill. She has raised concerns that the new law would reduce potential penalties for carrying an illegal gun in Washington, a city that routinely sees deadly shootings.

The mayor can veto the bill or return it to the Council unsigned with a letter outlining her concerns. If Bowser were to veto the bill, the Council — having voted unanimously twice to advance the bill — would likely override it, Allen noted.

If she signs it, or the Council overrides, the bill then goes to Congress, which has 60 days to review. If Congress and President Joe Biden approve, which they are likely to do, the act becomes law.