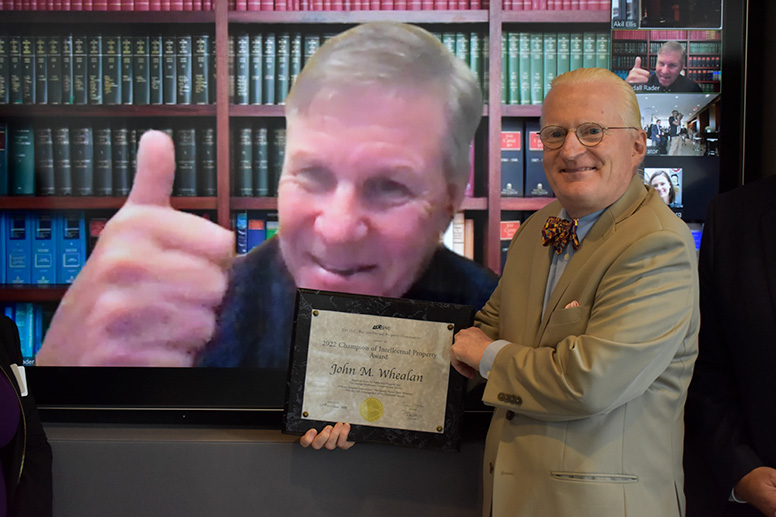 In a remote broadcast, retired chief judge Randall R. Rader of the U.S. Court of Appeals for the Federal Circuit remarked on Whealan’s outstanding legal career, particularly his impact on future attorneys. “Every year, 20 or 30 students rely heavily on him for advice and counsel,” Rader said. “He is the conduit that gets them internships and clerkships. There is an entire generation of young patent attorneys, some of them now moving into the middle of their careers, who have a great deal to owe to Dean Whealan. That is his crowning achievement. He is indeed a champion of IP.”

Before joining GW Law in 2008, Whealan worked at the U.S. Patent and Trademark Office (USPTO) beginning in 1996, first as acting deputy solicitor, and then as deputy general counsel for IP law and solicitor. During his time at USPTO, Whealan argued approximately 30 cases before the Federal Circuit and helped brief and argue more than 250 others.

Previously, Whealan was a staff attorney and litigator for the U.S. International Trade Commission for three years. In New York, he worked for one year in private practice at Fish & Neave as an associate. Before entering the law profession, he spent two years at General Electric as a design engineer.

Whealan has also been an adjunct professor at the University of New Hampshire Franklin Pierce School of Law and has taught courses at George Mason University Antonin Scalia Law School and Chicago-Kent College of Law.

In his acceptance speech Whealan expressed humility and self-effacing humor as he centered on two themes — gratitude and mentoring. He thanked numerous colleagues, judges, and family members who have supported his professional and personal development. When reflecting on his role as associate dean at GW Law, Whealan credited his students’ success largely on their hard work.

“I don’t do anything at GW. I don’t hire people; I don’t get any people jobs; I don’t sign a check. I try to move people around by making suggestions,” Whealan said. “When students ask me, ‘How can I repay you?’ I tell them, ‘Pay it forward.’”

On August 10 the Superior Court of the District of Columbia issued Administrative Order 22-18 regarding its conversion to a new case management and electronic filing system on August 22.

The District of Columbia Court of Appeals has announced that public access to certain cases is now available on the court’s website. Currently, access is limited to civil briefs and orders filed or entered after August 1, 2021. The ultimate goal is to provide more web-based access to additional case types in the future.

The D.C. Access to Justice Commission raised a record $7.2 million during its 2021 Raising the Bar in D.C. Campaign, with 34 law firms donating a portion of their D.C. office revenue toward enhancing access to civil legal services in the District.

On July 26 the District of Columbia Judicial Nomination Commission recommended D.C. Superior Court Judge Anthony C. Epstein to fill the judicial vacancy on the D.C. Court of Appeals created by the retirement of Judge Kathryn A. Oberly.