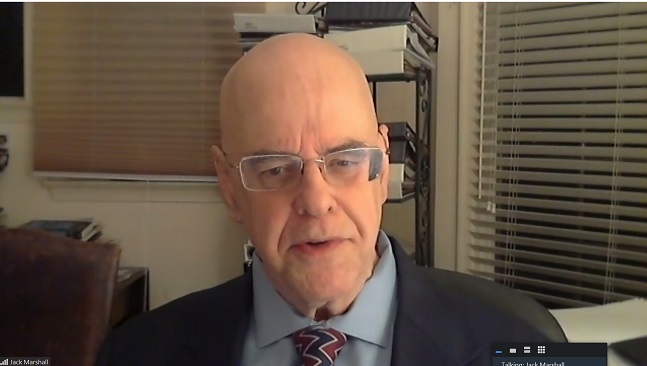 The D.C. Bar kicked off its 50th anniversary  programming on January 31 with the CLE course “Unsolved Mysteries: Ten Perplexing Legal Ethics Controversies of the Last 50 Years,” which took a close look at some of the most common ethical issues facing attorneys.

Jack Marshall of ProEthics, Ltd. described some scenarios that attorneys have grappled with since before the Bar’s creation, as well as others that have uniquely modern aspects related to the adaption of technology. Marshall cited how the digitization of legal practice, for example, has led to an increase in the accidental transmission of confidential information to adversary attorneys.

“Emails made faxes almost obsolete, and they were worse. You could, by pushing the wrong button, send thousands of documents to the wrong place,” said Marshall.

These disclosures may implicate a range of professional conduct rules related to confidences, technological competence, conflicts, and client consent, Marshall said. He also outlined how changes in technology have resulted in different approaches to addressing inadvertent transmissions.

In the early days, the Wigmore Rule applied, Marshall said. John Henry Wigmore, a law professor and renowned legal scholar, argued that counsel foolish enough to have transmitted confidential communications to opposing counsel had waived confidentiality. Many courts agreed with this proposition, but with the introduction of the fax machine the profession became much more forgiving of technology-related mishaps and required opposing counsel to announce their receipt of confidential materials and to destroy or return the materials. In some cases, the receiving party would even be made to withdraw their representation in the matter.

Marshall said that the shift from “you snooze, you lose” to “the Golden Rule” was curtailed because of the machinations of some shiftless attorneys. Unscrupulous firms intentionally sent confidential information to opposing counsel to force their withdrawal. Many jurisdictions adopted rules closer to the original Wigmore Rule.

Email generated similar responses, from initial understanding for the inadvertent transmission of information — particularly metadata — to a somewhat less sympathetic stance as the technology became more common and familiar. Marshall said that the District of Columbia, which does not provide an exception in its rules regarding metadata, takes a position closer to the Wigmore Rule than is found elsewhere.

“If you aren’t competent in the area of technology, you’re dangerous to your clients, so there is a penalty for this if you’ve screwed up and haven’t kept up on metadata,” Marshall said. “[The District] is a jurisdiction [that] has not dealt with metadata as any different from any other kind of information.”

On the duty of technological competence, especially in the age of the pandemic, Marshall said increased use of digital technologies to facilitate remote communication and virtual court appearances has resulted in greater guidance regarding an attorney’s responsibility to understand the tools they use in their practice. Marshall raised a number of recent ethics cases involving the use of Zoom.

Other issues Marshall explored are as old as the practice of law itself. Clients intending to provide false testimony have been a perennial concern, one that causes attorneys to balance their ethical obligation to preserve client confidentiality and the duties owed to the court and opposing counsel. Marshall brought up the case of Lizzie Borden, famously accused of killing her parents with an axe. Her attorneys refused to discuss their exchanges with their former client, and the duty of confidentiality survived Borden’s death.

Balancing duties owed to different parties was an element common to many of the scenarios Marshall presented. Several hypotheticals involved attorneys whose individual interests clashed with organizational ones. Similarly, Marshall discussed the potential ethical concerns involved when a client in one matter may be needed as a witness in the attorney’s representation of another client in an unrelated matter.

Work outside of the law also raised interesting concerns. For example, a lawyer who, as a private citizen, tries to undo the legal representation he undertook for his client might implicate the attorney’s duty of loyalty, generate conflicts of interest, and produce client consent issues.

The question of whether law is a business or a profession was the biggest mystery, according to Marshall. Business needs often run up against the principled practice of the law and the rules of professional conduct. Although the rules might address which actions can result in punishment, they often fail to fully address whether the conduct is truly unethical, he said.

Marshall concluded that legal ethics concerns require constant revisiting, as changes within the profession and society at large continue to impact the interpretation of an attorney’s ethical duties. “Despite the fact that I’ve talked about some of these issues before [and] I’ve been reading about and teaching these issues for years and years … you never know when something is going to happen in another jurisdiction or a fact pattern that no one anticipated [is] going to suddenly clarify it.”