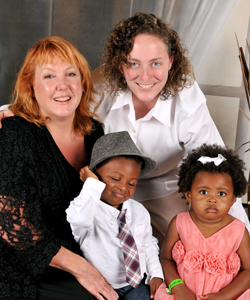 As a new, single transplant in Washington, D.C., Sharra Greer was looking to build her social life in a new city. At a women’s bookshop, she asked the clerk for her opinion on the best place to meet new people. Around the same time, D’Arcy Kemnitz also arrived in the District, and, as fate would have it, she asked the same clerk from the same bookshop the same question. And to either attorney, the clerk recommended that they try a women’s discussion group hosted by Whitman-Walker Health.

And that’s exactly how Greer and Kemnitz met, hitting it off despite their first “heated discussion” on whether the Millennium March on Washington in 2000 to rally for LGBT rights was a good idea. Today the couple jokingly admits that debate still has not been resolved.

Greer and Kemnitz are both passionate about social justice issues, focusing their work on improving the lives of marginalized individuals in society.

“I went to law school to work on civil rights issues, but also issues of justice and fairness,” says Greer. “I felt that the law was a good avenue to be able to do that work.”

Greer began her career as an employment attorney, but quickly transitioned to social justice and advocacy work when she joined the Servicemembers Legal Defense Network as its legal director. At SLDN, Greer played an instrumental role in laying the groundwork for a legislative repeal of the “Don’t Ask, Don’t Tell” military policy barring LGBT individuals from openly serving in the armed forces.

After 9/11 and the country’s subsequent wars in Afghanistan and Iraq, attention was sharply focused on the military, creating the conditions for the ultimate repeal of “Don’t Ask, Don’t Tell.”

“The country could see what it meant for people who were willing to serve our country overseas and be injured and killed,” says Greer. “And yet, they couldn’t be who they were. If anybody found out, they would be discharged.”

“Don’t Ask, Don’t Tell” was ultimately repealed in 2011 after Greer and her colleagues got a bill introduced in Congress. Greer was in the room the day the bill was signed into law. “Getting to be in the room with activists I had worked with for a decade, and veterans who had been discharged who would now be able to serve, was just amazing and powerful,” says Greer. “It was one of the most incredible moments I’ve ever had.”

Greer joined the Children’s Law Center (CLC) in 2008, serving as its first policy director, a role she continues to play today.

Kemnitz, who has led the LGBT Bar Association since 2004 as executive director, says she became a lawyer to advance her interests and career in social justice work, and to work to “make life better for everyone.”

“We’ve seen a lot happen in our lifetimes already. I would have never believed that, although it’s still up in the air, we would be looking at open transgender military service just a few short years after the repeal of ‘Don’t Ask, Don’t Tell,’” Kemnitz says.

On the day that same-sex marriage was legalized in the city, Greer and Kemnitz arrived at the courthouse—dressed in business attire and holding cups of coffee and newspapers—where they became “lucky couple number 22,” says Kemnitz.

“It was nerve-wracking,” says Greer. “There was the specter of Congress looming, and we weren’t sure [legalized same-sex marriage in the District] was going to happen. We wanted to make sure that we were there in line right away.”

Not long after they were married, Greer and Kemnitz dove head-first into parenthood. Almost immediately after getting approved to become foster parents, Greer received a phone call notifying her that there were infant twins at a hospital needing emergency placement.

“I told my boss I had to leave work,” says Greer. “I went to Target to buy a second set of everything, as well as formula, diapers, and clothes. I had to run to the house to set up the second crib.”

After a pause, Greer says, “Then we got these two beautiful children.”

Even as a highly-educated couple with plenty of support and resources, Greer and Kemnitz found the experience of navigating the adoption process challenging. Greer says their experience gave her an even stronger appreciation for the families the CLC works with, and now more than ever, she finds the organization’s work particularly important.

“Children and families are not being supported,” says Greer, who fears that various programs to assist children and families with learning challenges, language barriers, or who are facing homelessness could be cut drastically, leaving the city to make tough decisions about whether to fill the gaps.

Adopting the twins, Liam and Máire, was an eye-opening experience for Greer, who had observed the process from the outside through her work at the CLC. Greer says she was surprised by how much she felt like every other foster parent going through the adoption process considering all her experience with the adoption system.