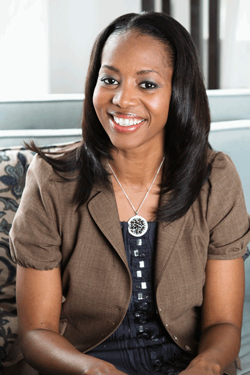 Never let it be said that Shannon Nash passes up an opportunity to do something a little different.

The lawyer, tax specialist, certified public accountant, and entrepreneur—who started her career in D.C. law firms—has taken her peripatetic life and fashioned it into a series of jobs and other ventures.

She was involved in producing a Cannes Film Festival-winning documentary on autism.

Several years ago, she opened an actors’ lounge in Atlanta.

Earlier, she was based in Switzerland, where her in-house job with Amgen required her to travel to France, Spain, and Italy.

Today, Nash, 46, is vice president of finance for Cumulus Media, based in San Francisco.

She credits her background for providing her with a foundation for everything that came after. She worked as a venture fund and tax lawyer for Cooley LLP (formerly Cooley Godward) and as a tax and corporate attorney for K&L Gates LLP (formerly Kirkpatrick & Lockhart).

“Those early years at law firms were invaluable because of the training they provide. They teach you to think and to communicate,” Nash says.

When her husband, Bill, a former Navy lieutenant, landed an interview at biopharmaceutical giant Amgen in Los Angeles, she tagged along. In the middle of her husband’s interview, he called her and asked her to take a cab over to the company’s offices.

“I thought they were trying to convince the spouse,” she recalls, since the job required a move to the company’s Lucerne, Switzerland, offices. But when she got to the Amgen offices, she found herself sitting down with the head of the tax department, and, ultimately, was hired along with her husband. “It was crazy—I was totally ambushed,” she says.

Nash spent two years working for Amgen in Switzerland. “At this point, my mind is being completely expanded,” she says. “I was meeting so many people of so many different backgrounds.” Not only that, but her in-house counsel job required her to travel to other countries where Amgen had operations.

Her years in Switzerland made her realize something about herself. “When I came back to the U.S. in 2005, I realized I am a completely different person. I am no longer a person who works at a law firm. I had all these amazing experiences and they were not traditional lawyer experiences.”

After Switzerland, Nash and her husband landed in Los Angeles. Around that time, their 18-month-old son Jason was diagnosed with autism, which was “challenging” in many ways, she says. She got involved with the group known today as Autism Speaks. (More recently, she has been less involved in autism issues, Nash says. Her son, now almost 19, is in a post-high school transition program.)

Dealing with her son’s disability was also how Nash got into the entertainment world, she says. The hours are more flexible—people in the entertainment industry tend to wake up late and work late, which meant that she could spend the early hours of the day taking her son to therapy. She went to work for the Debbie Allen Dance Academy, doing finance and human resources work.

Through Allen, an actress, dancer, and director, Nash made several connections. “I got introduced to everyone. Like, everyone.” Nash also says that Allen taught her confidence and gave her credibility in the entertainment industry.

When her husband’s next post was in Atlanta, Nash realized that the city, which was in its infancy in the entertainment world, was about to become a center for film production, so she worked in finance for several production companies there. In that process, she joined Sunseeker Media and helped produce Colored My Mind, a documentary about autism with a focus on parents of color—including Nash—which won “best short documentary” at the 2013 American Pavilion at Cannes. The company then started a nonprofit based on the film and sold the rights to the documentary to BET/Centric.

Nash also got involved in an entrepreneurial venture, an actors’ lounge called the Green Room. “That was so much fun,” she says, “but at the end of the day, running a business like that requires you to be there 24–7,” and the lounge closed. For future reference, she notes, she would pick a location that might be less central but that offered better parking.

The family eventually moved to San Francisco, where they are now based, and where Nash added radio to her skill set. Cumulus Media owns 454 stations in 90 markets around the country. At Cumulus’s San Francisco branch, Nash also runs the human resources department. Being a lawyer has been helpful for employment law issues, she notes.

One current challenge is that Cumulus Media is on the verge of bankruptcy, with a federal judge last month rejecting its most recent refinancing plan that would reduce its $2.4 billion debt load. “The industry is definitely in flux,” Nash says. Other radio giants have even larger debts, she adds.

Meanwhile, Nash is looking toward the future. Her ultimate goal, she says, is to get on the board of a for-profit corporation. In San Francisco, she joined Hipower, a group to empower women toward success. “It’s the different things you need to do to chart your course,” she says. It’s made her realize that doing in-house work and financial advising for a range of companies has helped her more than being a traditional lawyer.

“If your end goal is that you want to be in the C-suite somewhere, you need to have these experiences on your résumé,” she concludes.