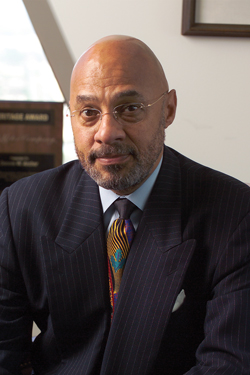 Dennis W. Archer, chairman emeritus of Dickinson Wright PLLC in Detroit, Michigan, has been a member of the D.C. Bar since 1972. He served two terms as mayor of Detroit from 1994 to 2001, and from 1986 to 1990, he was an associate justice of the Michigan Supreme Court.

You’ve been a member of the D.C. Bar since 1972, which makes you a founding member. As a lifelong Michigan resident, do you recollect why you joined the D.C. Bar?

I’ve always been impressed with your D.C. Bar leaders, officers, lawyers, and your staff. I started practicing law on June 11, 1970. It seemed to me if the opportunity came along to interact with outstanding lawyers, it would be a benefit and I would learn a lot—and I have.

I’ve worked with so many lawyers in the American Bar Association and the National Bar Association who have been D.C. Bar members. The staff has been very generous in helping those whose offices are not in D.C.

You were the first African American ABA president (2003–2004), and last summer you received the association’s highest honor, the ABA Medal, for exceptionally distinguished service. Of particular note has been your work mentoring new lawyers. What advice would you give those just entering the profession?

There are two lawyers who impacted my life and how I practice law. The first was my law professor at the Detroit College of Law, Donald Campbell. Before I graduated, he pulled me aside and told me that his office at Ford Motor Company’s general counsel’s office wanted any lawyer who met their qualifications. I worked in their office for the summer on Professor Campbell’s recommendation.

He also told me he’d observed that a number of black graduates were active in the Wolverine Bar Association, our local bar that was predominantly African American. Professor Campbell encouraged me to get involved in bar associations—the Detroit Bar, the State Bar of Michigan, and the American Bar Association, and I did that.

After I graduated and started in a law firm, the second best advice I got was from Samuel C. Gardner, a law partner at the Detroit firm of Bell and Gardner. Sam counseled: Make sure you return your telephone calls every day, even to a nagging client, because that person could refer you the biggest case you may ever receive in your life.

When your client comes in, get up out of your chair and bring your client back to your office. That way, you let the client know how important they are. Make sure that you keep a clean desk. You want your client to feel like they are the most important person you are meeting that day.

He said if you do those things you will earn a very good reputation. Also, get malpractice insurance, and charge a reasonable fee. And put your business relationship in writing—tell your clients this is what I intend to do and this is what you can expect. Your client will get good representation and will feel comfortable talking.

As for my mentoring, I have always tried to meet with anyone who has any interest in law school, or just going to college. When I speak at churches or at schools, sometimes people ask if I could meet with their son or daughter. Or kids come up and say, “I think I’d like to be a lawyer. Can I talk to you?” I say, “Yes—if you bring your parents.” Because I want the parents to hear what the requirements are—the need for good grades in high school and undergraduate school. I tell them how important it is to study really hard in law school and to earn the best grades possible.

If you’re going solo, you want to interact with lawyers who’ve been practicing a long time and get their advice. And you do that through a bar association. Begin to meet lawyers in other practice areas, because you never know when you’ll need to make a referral. You want to refer your clients to a person you are comfortable with and who you believe is ethical and hard working. You make those connections through your bar association. I believe in the work of bar associations.

You transitioned very successfully from a legal career to a political career. What advice would you give to lawyers who want to go into politics?

I got involved in politics by virtue of my father-in-law. I’d just gotten married and we were playing golf and my father-in-law told me I should talk to this lawyer he was in the army with during World War II, Robert Millender. Millender was a partner in Michigan’s largest integrated law firm and was very well respected. In 1969 Millender was running the campaign for Richard Austin, candidate for mayor of the city of Detroit. I wanted to show Millender that I could be a hard-working campaigner so that he might also conclude that I’d be a hard-working lawyer, too.

For the longest time now people have stopped by my office and expressed their desire to run for an office. I would listen and then I would share my experience. If you want to be elected, you’ve got to demonstrate to the people who vote that you are deserving...that you care about the people you want to represent...that you’re not just someone who shows up and says, “I want to be a judge, will you support me?”

Work with your party and with the people who are passing out campaign literature door to door. That’s how people begin to know you and respect who you are.

And if you’re a lawyer, you ought to be involved in pro bono work. There’s an old saying, “If you cast your bread upon the waters, it will come back to you.” You have to give back before you want something.

Get involved and help other people. Go to fundraisers, buy a ticket to help other candidates. All the while you’ll learn, you’ll listen to those people, and you’ll learn about the community you want to serve.

Those who take this advice are generally successful. Those who don’t, rarely win.

What do you make of the economic resurgence in Detroit? Luxury watchmaker Shinola, Quicken Loans, Buick’s “Made in Detroit” ads, hipsters. As a former two-term mayor of Detroit, do you feel responsible for planting the seeds of this comeback?

There have been big changes in Detroit. I began my service in January of 1994. The 1990 census had Detroit with the highest percentage of people living below poverty—32.2 percent. When you factor in children, 46.6 percent lived below poverty. I knew Detroiters needed jobs.

Before I announced my candidacy, I spent about a year developing solutions to the problems we were facing in nine critical areas. I reached out and got help from a number of outstanding professors at the University of Michigan. We had experts from other cities, community leaders from Detroit and the region talking about different initiatives. We looked at other cities and how they faced their challenges.

After I was elected, we were able, with the help of then President Bill Clinton and his administration, to get a hand up from their very strong outreach to cities, such as with empowerment zones and the COPS [Community Oriented Policing Services] program. I also had a good working relationship with Michigan governor John Engler who came up with renaissance zones and SmartZones. Our administration had a very good relationship with the business community and companies like General Motors and Compuware who moved into downtown Detroit. The neighborhood communities and the foundation communities were all united to help the city of Detroit to grow and thrive.

I had a great team of people in my administration and others willing to help, who were smarter than me. By the end of my two terms, we had $20.2 billion of new investment in Detroit and thousands of new jobs. I was the last mayor before bankruptcy to have a balanced budget, a rainy day fund, and a budget surplus in each of my eight years of service.

During my eight years in office the pension funds for police, fire, and general were overfunded by millions of dollars. We built two new stadiums, one for the Detroit Tigers (Comerica Park) and one for the Detroit Lions (Ford Field). We also had the benefit of a statewide vote in favor of three privately owned casinos in Detroit.

[Editor’s Note: After Archer’s term as mayor, subsequent administrations struggled to stay on economic footing and the city filed for bankruptcy in 2013.]

The business community never turned its back on the city of Detroit. They always continued to be supportive. Even before Detroit emerged from bankruptcy, it was clear the city was on the uptick.

Young people started investing in the city. Young people started coming back. Now if you were to come to downtown Detroit and you want to lease space for your car, you would be told there is no space available. In downtown Detroit you can rent, lease, or buy an apartment, loft, or home. The same can be said for mid-town Detroit these days. The great thing is the new housing built to accommodate those who want to rent, lease, or buy. There are all kinds of new restaurants and businesses that have opened since Detroit has emerged from bankruptcy.

In 2001 you began the Dennis W. Archer Scholarship Fund and have since given over a million dollars away to Detroit or Cassopolis high school graduates going to either Wayne State University or Western Michigan University. Can you tell us more about this scholarship?

It was started to help students who have at least a 2.5 honor point average and have to work at least 20 hours per week to make ends meet. I wanted to provide them with up to $5,000 a year so perhaps they could quit working, or at least work less in order to get better grades and graduate.

The Archer scholars have been very successful. I also have a small scholarship at Lawrence Tech for students who need money for books and other important immediate needs.

Any chance of retiring?

No. When you find something you love, you never work a day in your life.