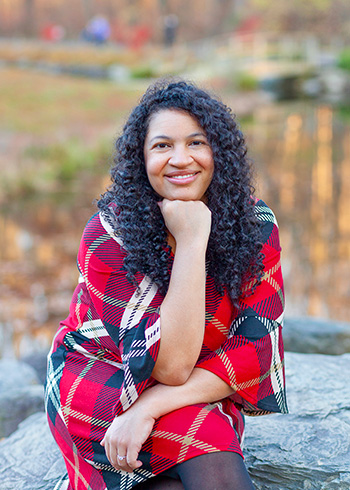 For civil rights attorney Michelle Coles, her response to righting the past and present wrongs of racial injustice was to create a poignant coming-of-age story that highlighted true inequalities thrust upon African Americans since the abolition of slavery. Using history as her bridge, Coles produced a young adult novel entitled Black Was the Ink, which masterfully combines time travel, the Reconstruction era, and modern social justice issues.

Black Was the Ink is an emotionally exhilarating journey into the past, present, and future lives of African Americans, particularly the central character of your book, a teenage boy. How did you develop such a unique story?

It all started with the tragic Mother Emanuel massacre that took place in Charleston, South Carolina, on June 17, 2015. At the time, I was on maternity leave from my job as a civil rights attorney with the U.S. Department of Justice, and I struggled with how to prepare my infant son to enter a world filled with so much inexplicable hatred toward people who look like him. I was surprised to learn that Denmark Vesey, leader of one of the largest attempted slave rebellions, founded the congregation that became the Mother Emanuel Church, and Pastor Richard “Daddy” Cain, one of the first Black members of Congress, led the church during Reconstruction. Also, Booker T. Washington spoke there, and Coretta Scott King led a protest on behalf of striking hospital workers from the church’s steps where she was met by bayonet-wielding members of the South Carolina National Guard. Suddenly, the link between slavery, the collapse of Reconstruction, the civil rights movement, and present-day racial injustices crystallized for me, and Black Was the Ink was born.

Given the dynamic subject matter and nuanced storytelling, who is your target audience?

I have four young sons, and I wanted to write a book that would help them understand the struggle for civil rights as early as they could comprehend it. Because of some mature content, including recounting several forgotten massacres of African Americans, my publisher, Lee & Low Books, set the target audience at 13 and older. Even though it is written as a young adult novel, adults also love the book because they learn so much from it. I would say my target audience is anyone who is interested in learning why racial disparities continue to exist 150 years after the abolition of slavery.

Reconstruction, family pride, and coming of age are a few themes in your work. Overall, what do you expect the reader to learn?

I would hope the reader learns how policy choices made in the past continue to impact the present. When you look at the first Black members of Congress who served during the 1870s and see the bills that they and others introduced to help Black people transition from enslavement to citizenship, you can’t help but wonder how different America would look today if their plans had been fully realized. Only a few years removed from slavery, Black people in the Reconstruction era were owning successful businesses, serving in Congress, building their savings, reuniting as families, and getting an education, all of which had previously been denied to them. But only a few years later, white supremacist-fueled violence led to the end of Reconstruction and the rise of Jim Crow, along with a loss in opportunities that Black communities are still struggling to recover from today. The more we study and understand this history, the better prepared we will be to make sure it doesn’t repeat.

Modern-day racial inequalities didn’t just occur from happenstance, and they won’t reverse through inertia. Black Was the Ink challenges people to see history from a different perspective and forces readers to ask themselves if the choices they make today reflect who we tell the world and ourselves we are. It is never too late to start making policies grounded in justice and fairness.

Black Was the Ink could be an action movie. Who would you cast as the main character? And are you working on a second installment?

Thank you. I hear that a lot. I would love to see Black Was the Ink on the big screen! I had actors in mind for all of the Black congressmen during Reconstruction, and it would be an all-star cast. For instance, I saw Idris Elba as Robert Elliott, Common as Hiram Revels, Terrence Howard as Blanche Bruce, Mos Def as Richard Cain, Hill Harper as Robert Smalls, and Anthony Mackie as Cedric the ghost. I pictured Michael B. Jordan as the main character, Malcolm, but he is a grown man now. I’d love to find a teenager who could bring his intensity to the role.

I’m not currently working on a second installment, but I am working on other stories that highlight the connections between the present and the past.

Where can we find your work?

You can keep up with me by signing up for updates on my website, michellecoles.com. I’ve also been doing a fun Black Was the Ink “book tour” on Instagram (@michellecolesauthor) where I post pictures of me and my book at various places with under-appreciated connections to Black history. I am represented by literary agent Charlotte Sheedy and look forward to publishing more civil rights-themed young adult and children’s books soon.

June Phillips is a D.C. Bar member and founder of TrueBliss Television.