Born in British Guyana and raised in Canada, Marblestein-Deare worked in community and human 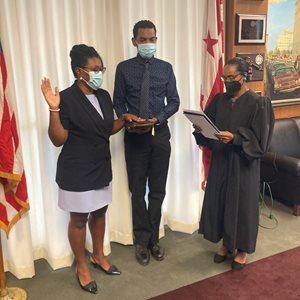 services administration in Toronto, including serving as program manager and adjudicator for the Canada Employment and Immigration Commission. Marblestein-Deare graduated from the Royal Canadian Mounted Police (RCMP) Training Depot in Saskatchewan, becoming the second Black female officer in the RCMP’s 102-year history. She was stationed in eastern Canada and endowed with federal law enforcement authority throughout the country.

Marblestein-Deare said her police experience reinforced a belief that when those in authority treat the public with respect, it is reciprocated. “If you show people respect and fairness, they really do rise to the occasion and appreciate it,” she said.

As one of the few Black women in the RCMP, Marblestein-Deare said she also knew that she was both highly visible and memorable, necessitating a high standard for conduct both in and out of uniform.

Marblestein-Deare went on to work in the Executive Office of the Mayor, representing executive agencies in labor–management matters. She opened her private practice more than 15 years ago handling family law, education, juvenile delinquency, and probate matters.

Marblestein-Deare said she is eager to tackle her new role as magistrate judge. “It’s a gratifying feeling, and I’m really excited to move on to a new level and a different challenge,” she said. “My entire career has been focused on working with people and helping people who are off-track find the resources to get back on track. I went to law school to help the disadvantaged because somebody needs to speak up on their behalf. Everything else has evolved from that.”

Rickard has served as an assistant U.S. attorney for the District of Columbia since 2009, most recently as a 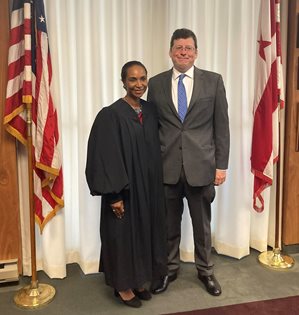 “I’m excited to be part of the administration of justice,” Rickard said of his appointment. “Going from the role of attorney to judge and taking on the duty of efficiently and fairly deciding cases and administering justice is very exciting.”