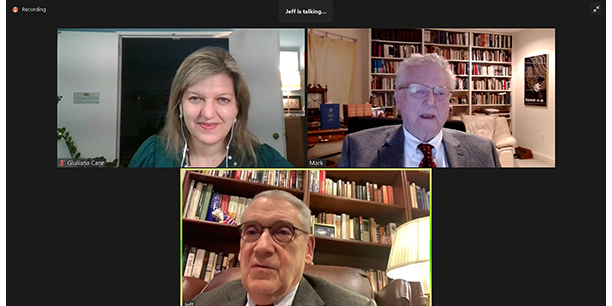 On February 18 the Washington Foreign Law Society hosted part one of its two-part conversation with attorney-diplomats on crisis management, featuring Mark B. Feldman, former deputy and acting legal adviser at the U.S. Department of State, and Jeffrey Smith, former general counsel of the Central Intelligence Agency.

Feldman reflected on his more than a half-century of legal practice, including 16 years at the State Department, that gave him proximity to, and often involvement in, some of the most historic foreign policy events in recent history — from the Vietnam War to the Iran Hostage Crisis. Interviewed by Smith, Feldman talked about the importance of character and shared a series of anecdotes about his encounters with some of the 20th century’s leading figures in foreign policy.

As a young attorney, Feldman was involved in the drafting of documents that led to the treatment of captured Viet Cong guerillas as prisoners of war entitled to detention conditions subject to the Geneva Conventions. Feldman said he’d been told to “make it right” by William Averell Harriman, whose impact on American foreign policy stretched from the Truman to the Johnson administration. There was significant pushback from the military relating to the policy, though later even detractors would come to appreciate the value in the principled treatment of the enemy, according to Feldman.

Working under Henry Kissinger was an exhilarating experience, Feldman said. At an early meeting, Feldman was bold enough to challenge Kissinger during a debate in which the legal office’s positions were being poorly received. Later, at an event held at the Watergate Hotel, Feldman said he was formally introduced to Kissinger by the latter’s legal advisor, Carlyle Maw. “I know him,” Kissinger said. “He’s the guy that’s giving everybody a rough time.” “That’s what he’s supposed to do,” Maw replied.

The impression Kissinger made on Feldman remains apparent today. “He had a style that was all his own,” Feldman said. For instance, in negotiations leading to the Helsinki Accords, Feldman recalls Kissinger instructing his aides, “You may attend these meetings, but you will not speak.” An imperious decree, but one that may find justification in that the Accords were successfully concluded, ultimately benefitted the West, emboldened Eastern European states, and contributed to the eventual dissolution of the Soviet Union.

Feldman’s recollections about the Iran Hostage Crisis, by contrast, focused on the difficulties involved in reaching agreement with a party that refuses to negotiate. He said that although the crisis was a political disaster for the Carter administration, the outcome of claims settlement negotiations associated with the crisis was excellent. “The task of the lawyers was to draft an agreement that was sufficiently attractive and plausible for the Iranians that we could conclude a negotiation without ever meeting them. It was quite an amazing undertaking,” Feldman said.

Comparing his years in private practice to his public service, Feldman said that his foreign policy work with the government put him in an environment where he felt comfortable taking principled positions, even when reactions weren’t always positive.

“I blush to say that in private practice there are a lot of lawyers [who] make a living lying for clients. You don’t need to do that in government,” said Feldman, currently an adjunct professor of law at Georgetown University Law Center. “In my experience, at least, in the State Department, in our generation nobody asked a lawyer to lie for the government. The problem was the clients didn’t want to hear the constraints. No client wants to hear that you can’t do what you want to do.”

“That’s why Henry Kissinger was yelling at me so often,” Feldman continued. “The risk there is being cut out of decision making and becoming irrelevant in the process, and every legal advisor has to deal with that, but if you’re not prepared to bring your values with you to the job, you might as well do something else.”

Part two of the conversation takes place on March 18, with Feldman interviewing Smith about his involvement in the joint congressional committee investigating the Iran-Contra scandal, spy trades culminating in the release of Soviet dissident Anatoly Sharansky, and his participation as a U.S. observer to the trial of Korean politician Kim Dae Jung, who would later be elected president of the Republic of Korea and receive the Nobel Peace Prize.

Visit the Washington Foreign Law Society website to register for the next installment of “Inside the Room: Attorney-Diplomats at Work on U.S. Foreign Relations.” The program is cosponsored by the American Society of International Law and the ABA International Law Section.

Daniel Rezneck, former senior assistant attorney general for the District Columbia and fourth president of the D.C. Bar, passed away on February 23 at age 85.

On April 22 and 23 the D.C. Bar and the D.C. Courts will continue their tradition of bringing together judges, Bar leaders, attorneys, and other experts for the biennial Judicial and Bar Conference. Held virtually this year, the event will offer 20 breakout sessions that explore the theme “How COVID-19 Has Reshaped the Legal Profession.”

The District of Columbia Courts is seeking to recognize attorneys who devoted 50 hours or more to pro bono service in 2020 through its annual Capital Pro Bono Honor Roll. To be added to the honor roll, please submit your name by Monday, March 15, 2021.