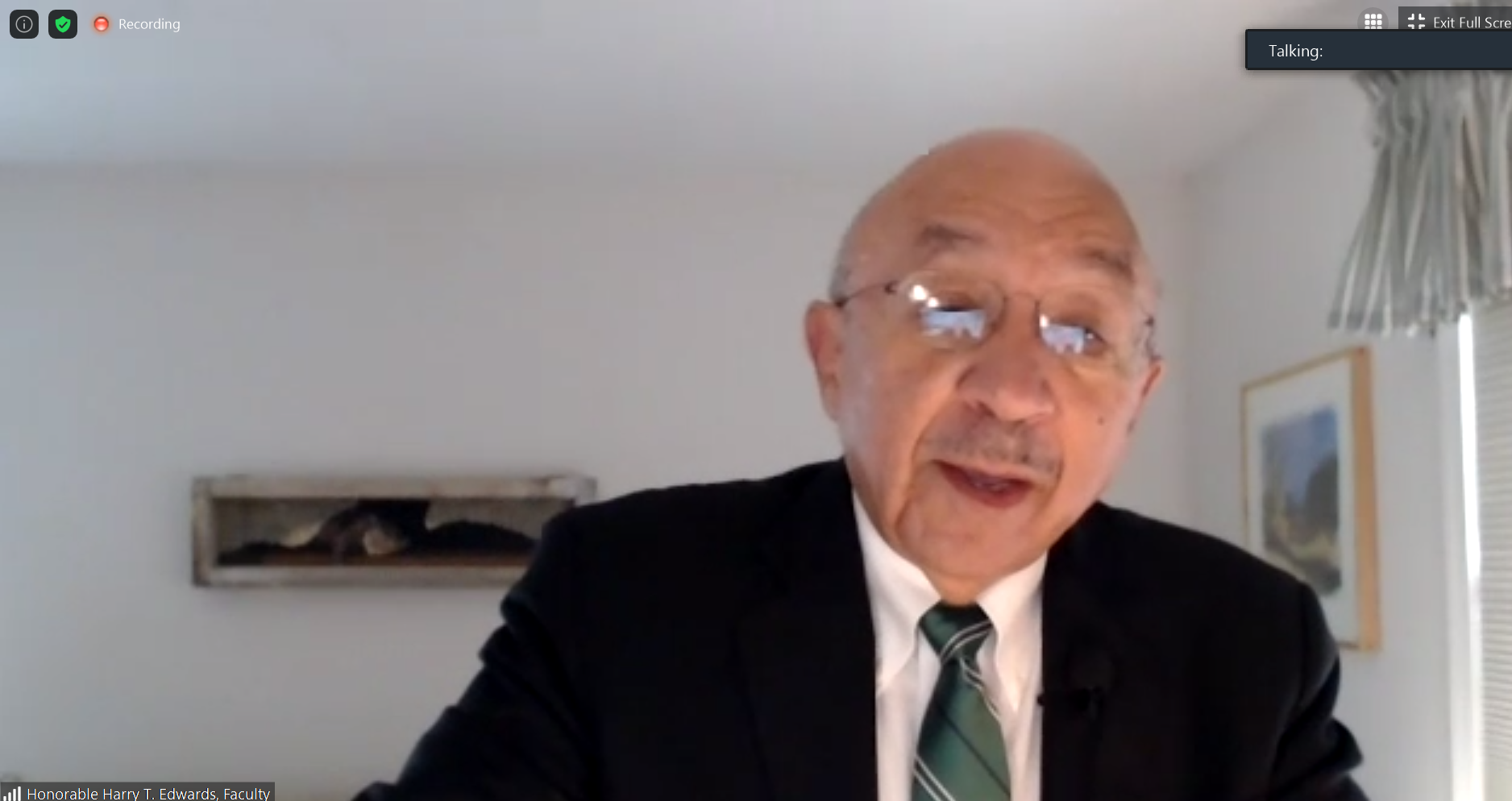 Senior Judge Harry T. Edwards of the U.S. Court of Appeals for the District of Columbia Circuit gave close to 100 attendees a rare peek into the appellate decision-making process during the D.C. Bar CLE Program’s Appellate Advocacy class on December 4.

Judge Edwards, who was appointed to the bench by President Carter 40 years ago and served as chief judge of the D.C. Circuit from 1994 to 2001, shared his insights into the court’s operations as well as opinions of his colleagues on the bench regarding how attorneys can best present their cases.

Judge Edwards was unequivocal about the importance of the brief, as were the judges he polled. “The brief is the most important thing. It frames the case. It’s endurable; it’s easily accessible,” he told attendees. “Accessing what you said in oral argument . . . we can do it better now because we have an audio recording, but it’s not as easy as going back to your brief. It’s what you write that really matters. We normally start with it, and we end with it. We can decide most cases without an oral argument. We can use the briefs and the record.” The judge went on to say that issue preservation is an important and often overlooked function of briefs.

Although the judges he polled uniformly felt that briefs are critically important, they also said oral arguments are not insignificant. Oral arguments can result in concessions that narrow the question or swing the court in close cases, Judge Edwards said. There are also important opportunities for attorneys to clarify the record or to address potential misunderstandings. Attorneys should know the record better than the judges, he stressed.

“It’s your case. You brought it to the court. You should know it better than we do,” Judge Edwards said. Oral argument is also an opportunity to convince judges to change policy. “Scholars are wrong on some issues. Convince me.”

Alongside opportunities to inform and guide the court, attorneys should be aware of potential pitfalls in their brief writing. A good appellate brief tells a story, Judge Edwards said, and is a pleasure to read. The best briefs are plain English, stick to the point, and lack the distractions of rote citation and overwriting. He expressed particular displeasure with footnotes, which he called “maddening.”

The most telling mistakes in briefs include a lack of authority, poor organization, deficient writing, errors in style, and lack of clarity. “The quality of the brief — I cannot emphasize this enough — has a significant impact on the opinions of judges and our law clerks,” he said. “If what you’re arguing is not organized or is not supported by authority, you’re losing ground in your presentation to us. If you take us off track, you lose credibility.”

Missteps can also take place during oral argument. Among the colleagues he polled, Judge Edwards said there was clear consensus that an attorney’s failure to answer questions raised by judges, including resisting hypotheticals and avoiding challenging questions, is most damaging to their case. “We assume you’re supposed to know where you are vulnerable. We assume good attorneys come prepared to answer the questions that have to do with the weaknesses in their case, and good attorneys want those questions raised,” he said. Hypotheticals help the judge determine how to draft an appropriate opinion, and attorneys who directly address the weaknesses of their case have an opportunity to impact the judge’s thinking on the underlying issue.

Some attorneys may feel that they are in the clear if judges don’t raise an issue during oral argument. That’s a terrible assumption, Judge Edwards said, pointing out that if a question is raised by the record, the judges will answer it in their decision. Argument is an opportunity to convince the court that your answer is the correct one.

The judge also touched upon the court’s shift to remote operations on account of the COVID-19 pandemic. Dialing into the day-long virtual event from Massachusetts, where he has sheltered since this past summer, Judge Edwards said that he and other members of the court took the transition to virtual practice seriously, describing the court’s efforts to establish a “no frills” virtual experience in which unnecessary clutter is eliminated and the attorneys and the panel of judges are easily visible.

There are important nonverbal signals that need to be conveyed, he said. “If you make a weak argument and you’re smiling … that’s very useful for me to see and I’ll tell you, ‘Doesn’t look like you have great faith in that argument, counselor.’ I want to see you, and I want you to see me. If I’m scowling at what you’re saying, I think you’re entitled to know that.”

Judge Edwards also provided a snapshot of the qualities he and other members of the appellate court feel characterize a strong appellate attorney. “A great advocate is fortified by knowledge, preparation, and focus and has the ability to engage in compelling conversation with a panel of judges,” he said. Great attorneys watch and listen closely. They help keep the hearing moving by guiding the judges to relevant lines of inquiry. “We sometimes say really inane things because we’re wallowing around in the record and we may not fully understand. Get us back on track,” he added.

This commentary reflects Judge Edwards’s broader characterization of attorneys and judges as collaborators and facilitators of the legal process. “You know the record. You know your client’s interests,” he said. “It matters how you participate.” The court wants to get it right, but it can only work with information and argument that is put on the record. It’s a high compliment to attorneys, he said. “We count on your work, and there are consequences when it isn’t good.”

The DC Bar is seeking candidates for committee and board vacancies.

Member Spotlight: Judith del Cuadro-Zimmerman Strikes Out on Her Own

If the New Year is for fresh starts, Judith del Cuadro-Zimmerman is right on track. The Brooklyn-born attorney spent the last part of 2020 in launch mode for her small firm practice, del Cuadro-Zimmerman, PLLC, which is officially open for business in Washington, D.C.

Although it took place in a virtual setting this year, the D.C. Bar’s two-day Tax Legislative and Regulatory Update remained jam-packed with informative sessions on the latest developments in individual, partnership, corporate, and international tax code and reform.

With the presidential transition less than a week away, the D.C. Bar’s 2021 Tax Legislative and Regulatory Update conference on January 13 and 14 provided timely insight to 400 practitioners on potential tax policy changes under the Biden administration.