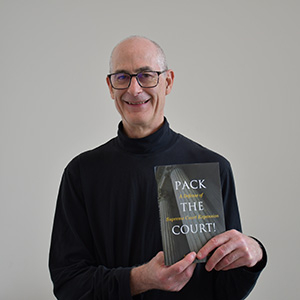 Stephen M. Feldman, the Jerry W. Housel/Carl F. Arnold Distinguished Professor of Law and adjunct professor of political science at the University of Wyoming, has written extensively on the intersection of law and politics. His latest book, Pack the Court! A Defense of Supreme Court Expansion, delivers on its titular promise in a text that examines the historical, analytical, and political arguments in favor of court packing.

What sort of precedent exists for Supreme Court expansion?

Nothing in the constitutional text says anything about the size of the Supreme Court. The very first Judiciary Act in 1789 created a Supreme Court of six justices, but that first Congress didn’t have to choose six justices. The constitutional text left it wide open. In fact, in the political disputes surrounding the election of 1800, when John Adams and the Federalists lost to Thomas Jefferson and the Republicans, both the Federalists and the Republicans fiddled around with the size of the Court. In other words, political manipulation of the Court’s size happened soon after the Constitution went into effect. And since then, when Congress has changed the size of the Court, it was usually for political reasons.

You provide a detailed history of Franklin Delano Roosevelt’s court-packing attempt, which ended up not expanding the Court but did lead to changes. Would you consider it successful?

In terms of evaluating the success of FDR’s court-packing plan, one has to first determine the measurement for success. If success is a matter of getting a statute passed that literally changes the size of the Court, then it was not successful. On the other hand, if one thinks of success as influencing the Court to shift its position, particularly from a political standpoint, then FDR’s court-packing plan was successful.

FDR did not have any Supreme Court appointments during his first term in office. During that time, the Court became a major obstacle in the way of the New Deal. Roosevelt got reelected by a landslide in the 1936 election, so after that election he finally decided to do something about the Supreme Court. To be clear, his administration had been talking about something like the court-packing plan for months before the election, though he only publicly announced the plan in February 1937, three months after the election.

According to his plan, the Court would be expanded one additional seat for every justice over the age of 70, up to a maximum of 15 justices. He gave the pretext that the judges were too old to handle the caseload, which was patently false. Hence, some critics objected to his attempted subterfuge, his failure to acknowledge that he was trying to pack the Court to change its politics and decision making.

His plan had a chance to get enacted, but the Court shifted its position in the shadow of FDR’s plan. In particular, one moderately conservative justice, Owen Roberts, changed his position. He didn’t become an out-and-out progressive, but in a couple of important 1937 cases he shifted to vote [with] the progressive justices to uphold New Deal legislation. Then one of the most conservative justices retired. By the early 1940s people were calling the Supreme Court the Roosevelt Court because he’d had so many nominees.

In 1937, even after the Court had shifted its position, the court-packing plan still had a chance to pass, but then one of its major supporters, Senate Majority Leader Joe Robinson, unexpectedly died. With that, support for the plan collapsed, and given that the Court had already shifted, enactment of the plan didn’t seem politically important. Congress voted it down.

Both Republicans and Democrats have voiced concerns about the possibility that packing the Court would politicize an apolitical institution. Is this a legitimate concern?

No, and it’s not a legitimate concern on multiple grounds. First of all, as we’ve already discussed, Congress has changed the size of the Court, often for political reasons. Also, the nomination and confirmation processes have always been largely political.

In fact, if you go back through history, the Senate has rejected approximately a quarter of the Supreme Court nominees. This goes all the way back to George Washington’s administration. Washington’s nominee for chief justice in 1795, John Rutledge, was rejected by the Senate because of political reasons. Many senators disagreed with his opposition to the controversial Jay Treaty [regarding] disputes [with] Great Britain.

So, the size of the Court, the makeup of the Court, the confirmation hearings, and even the decision-making process of the Court itself are all political. Some constitutional theorists, particularly conservative theorists who claim to be originalists, sometimes claim that the Constitution’s meaning is fixed and certain — that politics has nothing to do with interpreting the Constitution. Plenty of evidence, however, suggests that politics always influences constitutional interpretation. I’m not saying that the Supreme Court justices, in most cases, render decisions based purely on their politics, but rather that the Court decides pursuant to what I call the law-politics dynamic.

In other words, the justices, in most cases, sincerely interpret the relevant legal texts, but the meaning they get from the text — the interpretation of the text — is never mechanical. Their cultural and political backgrounds always influence how they interpret the texts, including the Constitution.

For example, if a politically salient case involves free speech, we can compare how Justice Alito (on the right) interprets the First Amendment with how Justice Sotomayor (on the left) interprets it. There’s a good chance that they will disagree. Their disagreement does not indicate, however, that either justice is lying, or being disingenuous, or is too stupid to understand what the Constitution means. Rather, their disagreement illustrates that constitutional interpretation is not mechanical. Politics always influences the justices’ interpretations of the constitutional text. Alito and Sotomayor look at the same text and understand it, interpret it, differently. Politics matters, and that’s why politics is a big part of the nomination and confirmation process.

How conservative is the Roberts Court?

This Court is extremely conservative, and that was true before Barrett replaced Ginsburg. You can approach this question from a couple of different perspectives.

First, political scientists have created methods for ranking the politics of Supreme Court justices and, according to those criteria, the Roberts Court is the most conservative since World War II.

Second, we can directly examine the Court’s decisions. In many different contexts — including equal protection, religious freedom, congressional power, and other areas — the Court has handed down conservative decisions. Even in those rare cases where the Court seemingly reached a more moderate outcome, [it] has articulated extremely conservative doctrine. For example, before Ginsburg’s death, Roberts would occasionally drift over and vote with the progressives (as in the first Affordable Care Act case). Despite reaching a progressive conclusion — or at least a conclusion not as conservative as some observers had feared — Roberts would write an opinion molding the doctrine in a conservative direction so that, going forward, the case would have conservative ramifications.

Your book addresses the question of whether progressives should act to pack the Court. What parts of your book might be interesting or valuable to conservative readers?

The historical and analytical portions of the book are not necessarily related to progressive court packing. Rather, I discuss the makeup of the Court — how it is constructed, why it currently has nine justices, and so on. That information is significant whether you are on the left or the right.

This isn’t your first book. What other topics have you written about, and where can we find your work?

I’ve published dozens of articles and essays on constitutional law and jurisprudence. For those who might be interested in my other writings, however, it would probably be easiest to access my prior books. I’ve written two books focused on the First Amendment: Free Expression and Democracy in America: A History (University of Chicago Press, 2008) and Please Don’t Wish Me a Merry Christmas: A Critical History of the Separation of Church and State (NYU Press, 1998). I’ve also written two books emphasizing the influence of politics on the Court: The New Roberts Court, Donald Trump, and Our Failing Constitution (Palgrave Macmillan, 2017) and Neoconservative Politics and the Supreme Court: Law, Power, and Democracy (NYU Press, 2013). Finally, I’ve written one book focused on the evolution of American jurisprudence: American Legal Thought From Premodernism to Postmodernism: An Intellectual Voyage (Oxford University Press, 2000).

Lewis A. Grossman, professor of law and affiliate professor of history at American University, offers perspective on the pandemic-related mask and vaccine mandates by tracing the persistent but evolving concept of medical freedom in the United States in his recently released book, Choose Your Medicine: Freedom of Therapeutic Choice in America.